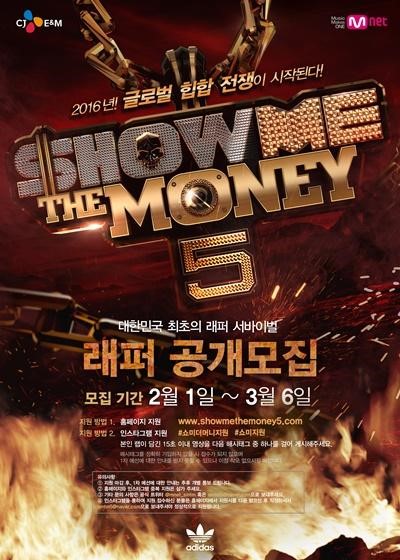 “Show Me the Money 5” to Hold Auditions in the U.S. for the First Time

South Korea’s first rapper survival show, Mnet’s “Show Me the Money 5” has announced that it is planning on hosting a global hip hop battle.

On January 27, Mnet revealed that “from February 1 to March 6 we are openly recruiting for any rappers who wish to participate” and explained that “anyone can audition for the preliminary round of ‘Show Me the Money 5.’ This year, we plan on expanding globally by not only holding preliminaries in South Korea, but also in the U.S., magnifying the scale of the show.”

Mnet elaborates that “with the upcoming season of ‘Show Me the Money’ just around the corner, more and more foreign rappers have approached us with the intention of joining. We wanted to extend this opportunity to all the rappers living aboard, allowing us to find a more diverse range of talented rappers, as well as introduce them to the public. You can expect a more fierce battle between these gifted rappers.”

Last year’s “Show Me the Money 4” featured talented rappers such as the final winner Basick, WINNER’s Song Mino, Blacknut, Innovator, and Lil Boi, who created a huge commotion and contributed to the rise of hip hop in popular music. Hip hop, which used to be considered the minority and only enjoyed by a particular group of people, has changed the face of South Korea’s music with its rise in popularity, carving a niche for itself as a genre. Viewers’ expectation for this new season of “Show Me the Money” is building up, due to the show’s large influence in the hip hop community.

“Show Me the Money 5,” with its best production crew and set-up yet, is planning on airing sometime this May. Fans are increasingly becoming curious as to who the new producers and participants will be. This season of “Show Me the Money” has already been upgraded to a new level, as this is the first time it will be holding preliminary auditions in U.S., an acknowledgement to the vast number international fans who love this show.

As mentioned before, “Show Me the Money 5” will have open recruitment from February 1 to March 6. Anyone from amateur rappers dreaming of a debut to talented rappers currently promoting underground are welcome to apply, regardless of gender and age, as long as you love rap and hip hop.