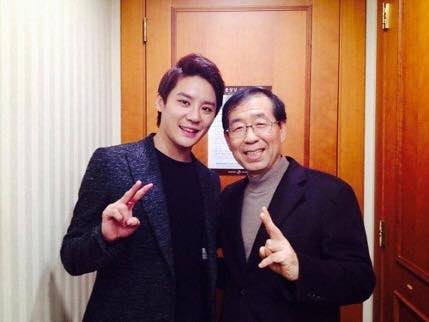 After JYJ’s Junsu was not invited to the Seoul Music Awards despite winning the Popularity Award, the mayor of Seoul Park Won Soon has issued a formal warning to the ceremony.

JYJ’s Junsu won the preliminary online vote for the Popularity Award at the 25th Seoul Music Awards with 46.7 percent of the votes, but was not invited to accept the award at the live event. While the show’s producers claimed that they had chosen not to present the award because they were planning on focusing on “major award categories” instead, many netizens were enraged by the fact that Junsu had not been invited, especially as fans had to pay to vote.

After one netizen tweeted to Park Won Soon asking for an apology and an excuse for the lack of invitation, he replied promising to look into the matter, and later stated that he is a fan of Junsu.

On January 28, Park Won Soon updated fans by posting on his Facebook page to say, “It hurts to think of the pain that this Seoul Music Awards Popularity Award incident causes JYJ and their fans.”

He goes on to write, “The city of Seoul has informed the organizers of the Seoul Music Awards through an official notice that if such an incident occurs again, we will be withdrawing our titled sponsorship of the event. The organizers have said that it was simply a mistake, but this is unconvincing.”

What do you think of Park Won Soon’s decision?

Seoul Music Awards
JYJ
Park Won-soon
How does this article make you feel?