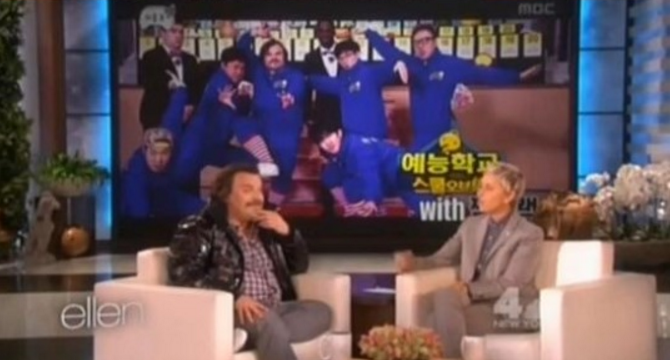 On January 27, Jack Black made an appearance on “The Ellen DeGeneres Show” and discussed his recent experience on “Infinite Challenge.”

When Ellen DeGeneres asked Jack Black about his recent appearance on a Korean variety show, he responded, “It was called ‘Infinite Challenge.’ It got pretty cardiovascular. I mean, I was I had to take breaks. There was a lot of sweating. That was a chicken dance. That was me stuffing a pillow fight.”

He went on to compliment the show and encouraged viewers to check it out.

While discussing his experience, a preview of the “Infinite Challenge Jack Black Special” was revealed causing much laughter to the audience. Ellen comments that her show would do the same stuff next season. Her remarks caused another round of big laughter among the audience.

Some of the most popular comments by netizens online were, “He’s giving great lip service all the way to the end,” “He has great sense to give publicity to ‘Infinite Challenge’ in America,” and “I definitely need to watch this week’s show.”

Kwanghee also posted a clip of the show on his Instagram account and wrote, “Wow~!!! We are bro!! Jack ~!! Infinite Challenge ~!!”

Viewers will be able to watch Jack Black’s special episode when it airs on January 30 at 6:25 p.m. KST.

Jack Black
Ellen DeGeneres
Infinite Challenge
How does this article make you feel?