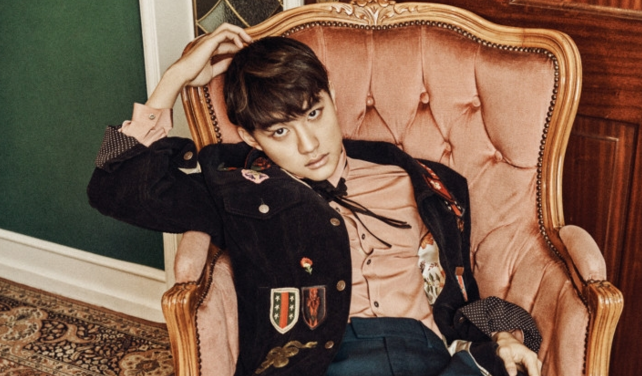 On February 1, EXO’s D.O sat down for an interview at a cafe in Seoul talking about his work in the upcoming film “Pure Love.”

He openly talked about the umbrella kiss scene he shares with actress Kim So Hyun.

D.O commented, “I was curious as to how this scene would unfold when I saw the script. I thought a great new scene would be created.” He cracked everyone up saying, “I was disappointed that there were no kiss scenes in the movie. You know how you can do things while acting you normally don’t get to do. When I read that it said ‘umbrella kiss,’ I thought we’d hide ourselves under an umbrella and kiss. But I was disappointed to find out I actually kiss the umbrella.”

He soon gained his composure and added, “Kim So Hyun is six years younger than me. I didn’t expect a kiss scene from the get-go. I just thought that the idea of kissing the umbrella was funny. I’m curious to see viewers’ reactions.”

“Pure Love” is a drama about the memories of first love and friendship. It’s a movie about a letter from 23 years ago that is delivered to the DJ of a live radio show. With flashbacks, screening both the past and the present, the movie will center around first love and friendship. D.O portrays a quiet and loyal Bum Shil who only has his eyes for Soo Ok (Kim So Hyun).

The film opens in theaters on February 24 in Korea.