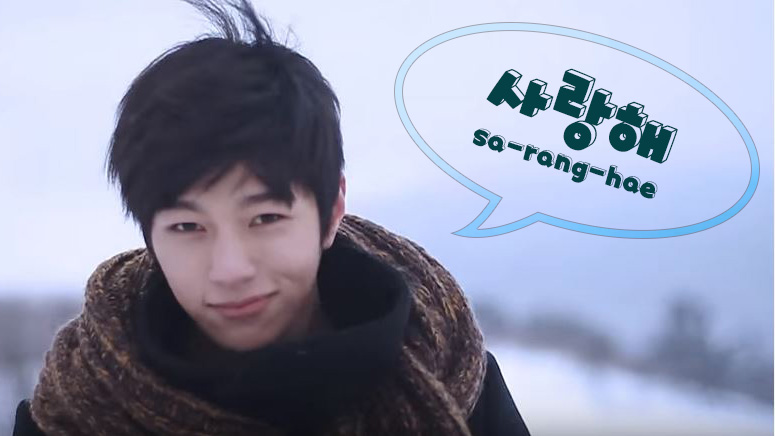 Welcome to the latest edition of K-Pop 101! Today we’ll be covering fan Korean. What is fan Korean you ask? In my four years of living in Korea, I’ve found that often the lingo used when dealing with fan events is vastly different from regular Korean. I’ve noted some of my favorites and listed them down below. If you happen to attend a fan event in Korea, or poke around online, hopefully you’ll catch some of these! 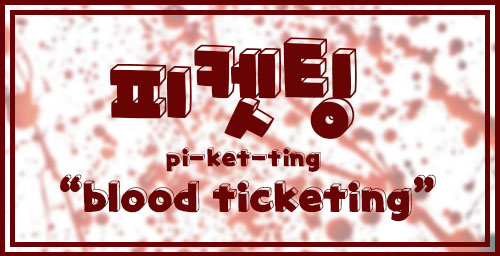 We’re starting off strong, with one of the most unique words I’ve learned through fan culture. 피켓팅, or “blood ticketing,” refers to the blood bath that fans go through in order to get a ticket in Korea. Ticketing is an intense activity, with concerts often times selling out in as little as five minutes. Clever Korean fans have coined this term to reflect the true savagery of the event. 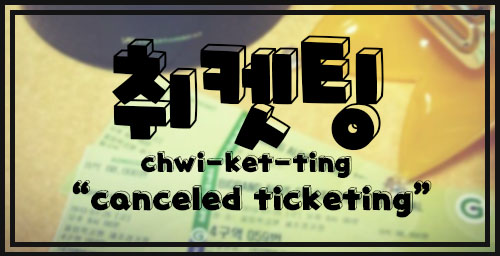 If you happen to lose out during the initial bloodbath of ticketing, there’s always a second chance through 취켓팅, or “canceled ticketing.” The “취” (chwi) in chwi-ket-ting comes the word “취소” (chwi-so) which means “to cancel,” which Korean fans have combined with the word “ticketing.” Fans use this term to refer to ticketing for canceled tickets. Oftentimes fans will stay up until as late as 4 a.m. in order to catch canceled tickets on ticketing websites. 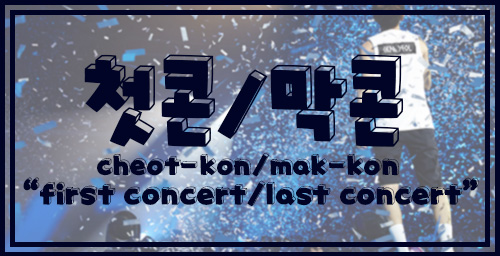 Keeping in the concert theme, I learned the words 첫콘 (cheot-kon) and 막콘 (mak-kon) after scrolling through many a post on the INFINITE fancafe. Fans use these words to refer to which day of concerts they’re going to when artists hold more than one. 첫 (cheot) and 막 (mak) mean “first” and “last.” Those words are combined with the first syallable in “concert” to form the fan-lingo above! If there happens to be three or more days of concerts, the word 중콘 (joong-kon) or “middle concert” gets added into the mix as well. 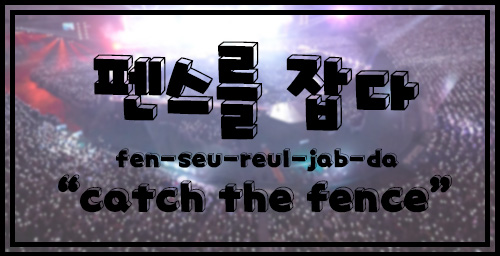 After the initial brawl of ticketing, many fans will begin posting their standing numbers and asking if they can “catch the fence” online. What does that mean? In each standing section, the area is lined with a standard wire fence. “Catching the fence” is a term asking if your number is good enough to be in the front row! Not only is there the benefit of being closer to your faves, but fans at the front also get to lean on the fence. This may seem like a small thing, but after almost three hours of standing, putting your weight on something other than your feet is a welcome reprieve. 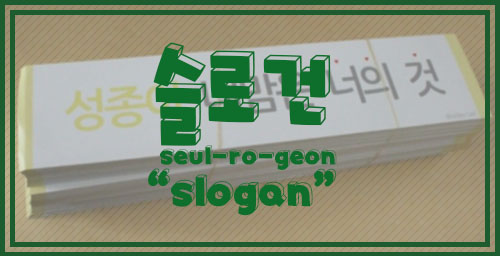 A “slogan” can mean one of two things: a thin towel sold by the company with the group’s name and design on it, which is the “official slogan,” or a banner (paper or cloth) made and distributed by fans at concerts or other events. Official slogans are usually sold by the company and used as a way to support groups at concerts or weekly recordings. Fans print their own slogans/banners and usually sell them at concerts. Many fan-events at concerts (domestic and abroad!) involve holding up a free paper slogan at a certain time. It’s pretty touching when you see a stadium full of white when the slogans are held up. 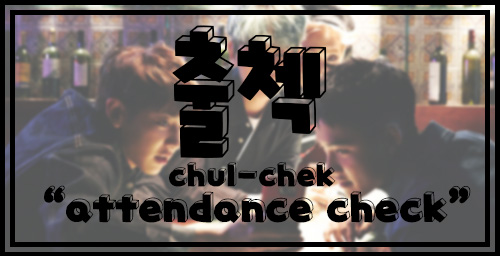 A phrase found more commonly at weekly music recordings, 출첵 (chul-chek) refers to the attendance check that the staff does before letting fans into the venue. Not only is this done at weekly recordings, but also at concerts for the standing sections. Korean concerts operate so that fans get entry numbers when buying their ticket, so it’s important for fans to be early for the “attendance check” lest they lose their spot! 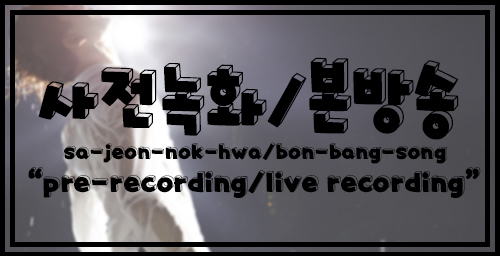 Other important phrases in the weekly music program-recording circuit, these are used when describing the type of recordings done for the weekly music shows. A “pre-recording” means that the artists’ stages/songs will be filmed before the actual live show, while the “live recording” means they’ll only be taking the stage during the live broadcast. Sometimes fans will stumble across a 사후녹화 (sa-hu-nok-hwa) or “post recording” as well, which means that artists will be recording after the live show. 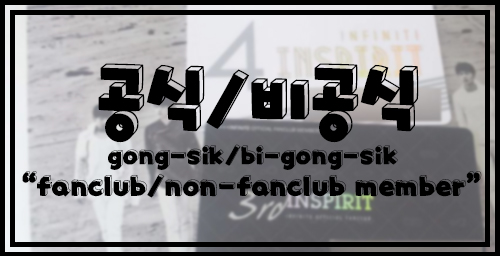 While we might just say we’re “fanclub” or “nonfanclub” members, Korean fans have a special word that differentiates fan status. “공식” (gong-sik) means “official” in Korean, and refers to the “official” members of the fanclub, while “비공식” means “non-official.” You run into these words the most when attending weekly recording shows, though I’ve been asked while standing in line at other fan events as well. 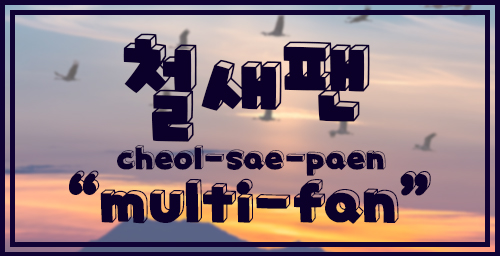 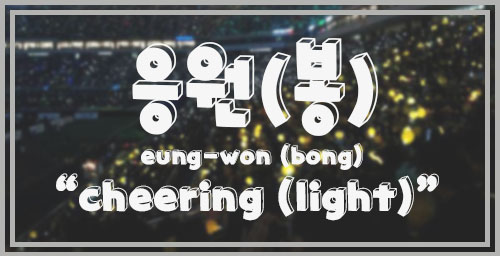 “응원” (eung-won) in itself is usually used to refer to the fanchats that are done during songs to support idols. Adding the word “봉” (bong) or “stick” at the end gives us the word for a fanlight! I’ve had many a morning when I’ve spent a train ride trying to cram a fanchat into memory… luckily they stuck! But now when the song plays I always have the urge to cheer… 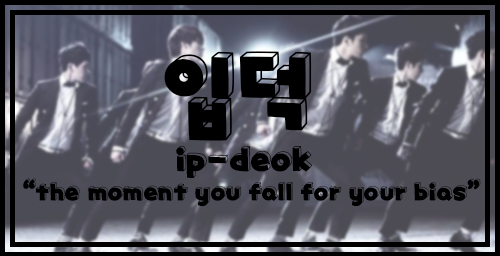 A Korean co-worker taught this word to me, and it’s definitely a useful one. “입덕” (ip-deok) combines the word/character “to enter” (입 ip) with part of the Korean word for “otaku.” It refers to the exact moment that one falls for an idol. Most commonly, this is combined with a word like “영상” (yeong-sang), meaning “video,” to refer to the video that got you hooked. 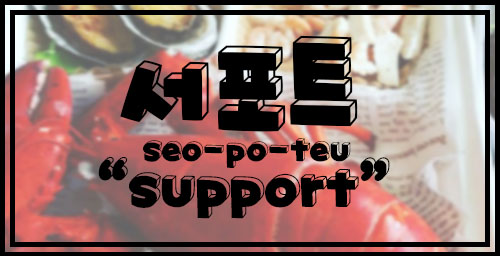 A “support” refers to the large fan-events that many fansites do to support their idols. You’ve probably heard of some of them before: buying fancy food for the idol and staff, renting out cafe carts to support a drama or movie filming, or buying birthday presents. An older Korean word, “조공” (jo-gong), is used in conjunction with this word, though the most commonly found one is now the English word “support” simply written in Korean! 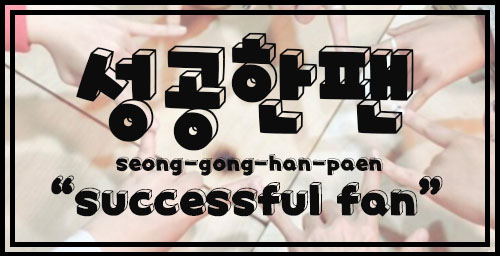 I was a little confused when the phrase “successful fan” was introduced to me. Did it refer to a fan that gained financial success through fangirling? In fact, this phrase refers to fans who are able to build a personal relationship with their idols through work or romance. This could come through entering the entertainment business and working with them on a TV show, or helping out behind the scenes of some other event that their idol is involved in. The key point is that their acquaintance goes beyond simply meeting one another and spans into a working (or romantic) relationship. The best recent example is EXID’s Hani, who is now dating JYJ‘s Junsu after being his fan since high school. That is certainly a successful fan!

What did you think of our Korean fangirl phrases? Are there any phrases you thought we missed or want to learn? Let us know in the comments!