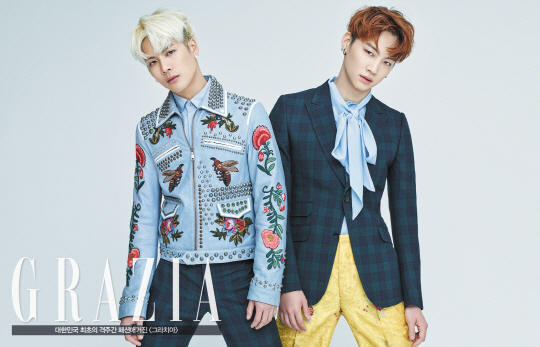 GOT7′s JB and Jackson have teamed up to show their chemistry for a Grazia magazine photo shoot.

Grazia has revealed one photo and video from the photo shoot so far. Despite being known for having polar opposite personalities amongst their fans, the pair took care of each other on set and exhibited a friendly, brotherly relationship.

JB and Jackson continued to show their affection for one another during the accompanying interview. Upon being asked whether the two of them ever meet separately on their own, JB replied, “Of course. We have become a lot closer recently. Jackson occasionally has a strong driving force and I am usually calm, but when we meet, we find a halfway point.”

Jackson commented on how he felt about the photo shoot and said, “It was the first time we had a photo shoot with just the two of us but it was really fun. JB as a leader and a hyung is a really cool man.” After saying these heartwarming remarks, Jackson laughed bashfully.

Details about their upcoming album were revealed as well. JB divulged, “We’re currently working and aiming for spring, but it’s too early to reveal specific concepts. Everyone is working hard to make an incomparable concept for GOT7.” JYP revealed that the group is planning to release a new album within the first half of this year.

Then Jackson showed his love for his agency and joked, “Actually I’m GOT7’s leader and manager. I take care of members and company employees extensively. I will continue to do so in the future.”

Lastly, the members were requested to ask each other burning questions they have for one another. Jackson asked, “If Junior and I fell into the water who would you save first?” JB answered, “I would either save both of you or neither of you,” and laughed. Next, JB questioned, “What are you going to do in order to raise awareness of GOT7 this year?” Jackson responded, “This has to be a year with all seven members living more smartly.”

Their full photo shoot and interview can be found in the February issue of Grazia which will be available starting February 5.

Check out Grazia’s Instagram video of them below where they ask fans to support the magazine and their group as well as share their Lunar New Year greetings:

GOT7
Jackson
JAY B
Grazia
How does this article make you feel?