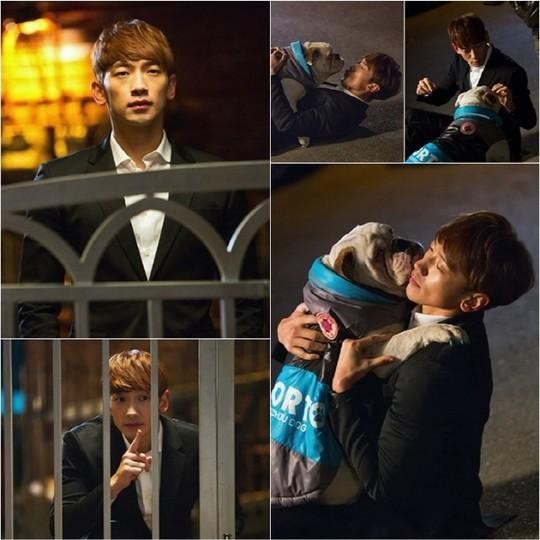 Actor-singer Rain shares some love with a bulldog in stills from his first shoot for the upcoming SBS drama “Come Back, Uncle” (working title).

In the drama, Rain will be playing the role of Lee Hae Joon, a handsome manager at a department store whose body is possessed by Kim Young Soo, a man who died from overworking but is given the opportunity to carry out unfinished business.

On January 11, Rain took part in his first shoot for the show at a house in Seoul. In his first scene, Lee Hae Joon has been possessed by Kim Young Soo, who returns to his home and reunites with his pet dog. It’s said that Rain arrived to the shooting location early, and took time to greet all the members of the staff and look around the set.

It has been reported that Rain quickly became friends with the bulldog, who was his first acting partner for the show. Rain, who is a dog owner himself, spent a long time hanging out with the dog and petting him.

A representative from the drama says, “Despite the record low temperatures, Rain kept lying down on the cold ground and getting up again, displaying his passion as he kept rehearsing in order to make the scene where the bulldog runs into his arms seem as realistic as possible.”

Rain says, “‘Come Back, Uncle” is my first drama in about two years. I think it’s really an honor to be able to take part.” He adds, “I’m so glad and excited to be able to work with such great actors, including many actors that I have always respected.”

Rain also adds that “Come Back, Uncle” mixes comedy and romance, and says he hopes that it will be a drama that families can watch together. “Please look forward to the premiere on February 24,” he says.