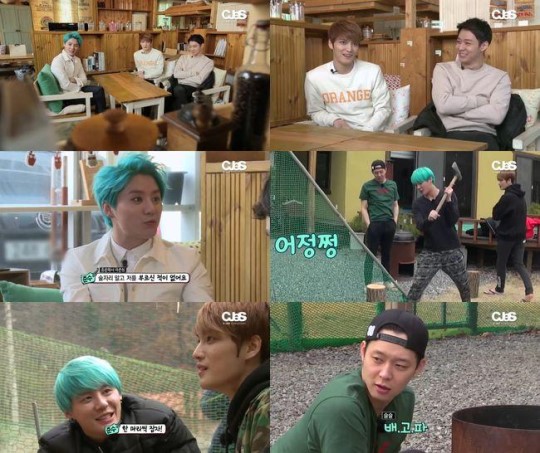 C-JeS Entertainment says, “We released the first look into JYJ’s laughter-filled ‘Fruitful Trip’ on Monday, February 1, on our Naver TVCast channel. Consisting of various stories from the surprise overnight vacation JYJ went on, more highlight videos will be released every day until February 5, at 12 p.m. KST.”

Different to the many personas they show on television, the big screen; and on stage, JYJ’s real, every day personalities are captured in this variety, which was filmed last March 2015. Fans are excited at the prospect of seeing the chaotic, comedic variety that ensued when the members were surprised with an overnight vacation.

The first episode of “Fruitful Trip” reveals JYJ’s dream of having a vacation where they just fish and eat good food. Meanwhile, the second episode, which aired yesterday, shows JYJ’s woodchopping tournament, and sparked a huge reaction amongst viewers. The remaining videos will include games fueled by their fierce competitiveness, and a showcase of vocal skills that exceeds even those on “King of Mask Singer,” further increasing expectations. Fans say that they never expected such a present like “JYJ’s variety.”

The third episode of JYJ’s “Fruitful Trip” will be released today, February 3, at 12 p.m. KST. You can watch the first episode below. English subs are available.

Fruitful Trip
Jaejoong
Junsu
JYJ
Yoochun
How does this article make you feel?