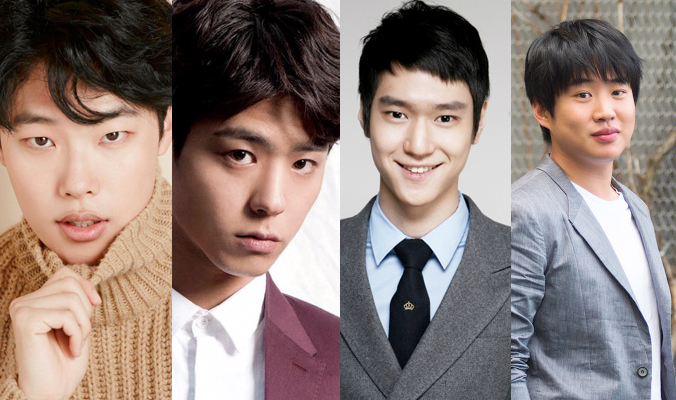 The four stars of the tvN drama “Reply 1988” that were “kidnapped” for the next season of “Youth Over Flowers” have returned to Korea from their adventures in Namibia!

Actors Ryu Jun Yeol, Ko Kyung Pyo, and Ahn Jae Hong were surprised during their “Reply 1988” cast and crew trip in Thailand on January 22 when the crew of “Youth Over Flowers” arrived and shepherded them onto a plane to Namibia to film the next season of the popular travel reality show. Fellow cast member Park Bo Gum later joined them after wrapping up filming of “Music Bank” in Korea.

The quartet arrived back at Incheon International Airport on February 2 after making a stopover in Hong Kong. They were met at the airport by the media, as well as a crowd of excited fans that even included some from China.

The guys all looked more tan than they normally do when they arrived, and they were also wearing shorts and light jackets and carrying camping gear.

They stopped in front of the press to pose for photos before saying goodbye and sharing hugs with the “Youth Over Flowers” crew, including the trip’s mastermind PD Na Young Suk.

The actors and crew headed off home without any formal interview, but when asked how the trip went, Ahn Jae Hong replied with a thumbs up. “What was it like to be kidnapped at first?” asked a reporter, to which Ahn Jae Hong replied, “I really didn’t know about it.”

Ko Kyung Pyo said about the trip, “It was really fun,” and added that he went into a state of mental breakdown during the kidnapping. As things got a bit chaotic at the airport in the crowd of reporters and fans, he reportedly then showed his concern by saying to everyone, “Please be careful!”

Are you excited to see this crew of four “Reply 1988” actors on the next season of “Youth Over Flowers”?