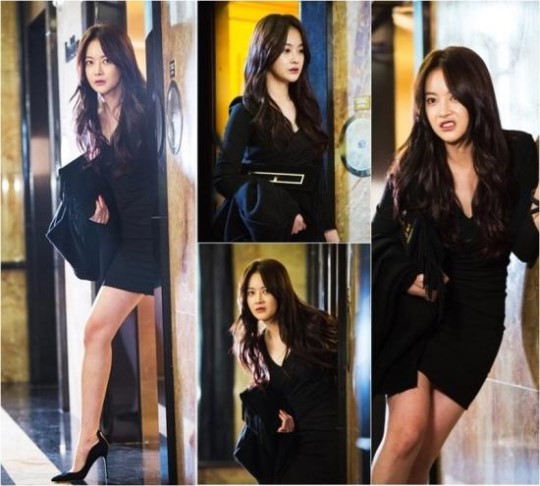 Actress Oh Yeon Seo is back as a fierce lady for the new drama “Please Come Back, Mister.”

The still cuts for the upcoming drama were revealed recently, and it shows Oh Yeon Seo has perfectly turned into her character Hong Nan, who was originally a man in his 40s but got reincarnated as a sexy young lady.

This still was taken when they filmed the scene where Hong Nan, who is actually Gi Tak (Kim Soo Ro), tries on high heels for the first time. Before her shooting began, Oh Yeon Seo arrived early on set and carefully observed other actors filming. Although there were many onlookers since this was filmed in a hotel, Oh Yeon Seo remained focused and thoroughly went over details with the director.

As soon as the cameras started rolling, Oh Yeon Seo gave her best during all takes to express the awkwardness of wearing heels for the first time.

The actress stated, “My first day of shooting was actually the coldest day in Korea in 30 years. I was very sorry for the staff. It was a bit awkward since it was my first day, but the staff was really welcoming so I was able to film comfortably in the end.”

She continued, “I was worried about how to express someone wearing heels and a dress for the first time, but I’m happy because I was able to film in such a bright atmosphere. Please continue to give love and support.”

Meanwhile, “Please Come Back, Mister” is a comedic drama about two people who get reincarnated as completely different beings. It will air on February 24 at 10 p.m. KST after “Remember” finishes its run.

Please Come Back Mister
Oh Yeon Seo
How does this article make you feel?