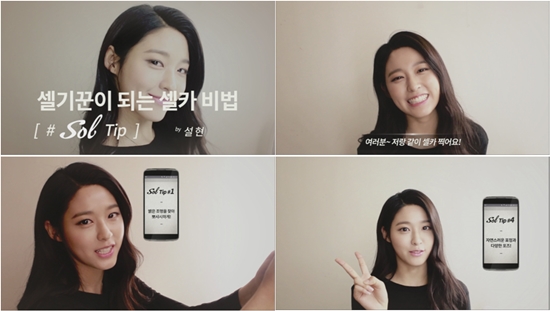 Watch: Seolhyun Teaches the Secret to a Perfect Selfie

AOA’s Seolhyun has revealed the secret to the perfect selfie.

On February 2, SK Telecom published a video by Seolhyun on their official Facebook page and it quickly racked up over 100,000 views in a day, showing her explosive popularity.

In the video, Seolhyun shows off how to take a pretty selfie by using SK Telecom’s new smartphone “Sol.” Seolhyun is their current model and she has consistently shown her popularity as one of the industry’s top current It girls.

She shows off a natural side to her with her loveable personality in the video, showing how to find the perfect spot to take a picture, how to find the perfect angle for the picture, and how to pose naturally in front of the camera. She mixes her selfie know-how with her adorable voice and cute facial expressions, sure to capture the hearts of all who watch the video!

Seolhyun is currently filming for the upcoming movie “A Murderer’s Guide to Memorization,” to be released soon.

Check out the video below and see if you can take the perfect selfie like Seolhyun!

AOA
SK Telecom
Seolhyun
How does this article make you feel?