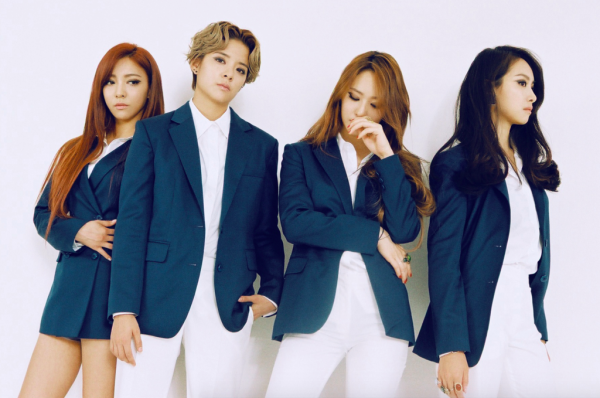 f(x) debuted in 2009 and has continued to release solid albums: especially their last 3 full albums, which are considered some of the group’s best work.

Recently, the girls fulfilled one of their biggest wishes and held their very first solo concert, “Dimension 4 – Docking Station,” which attracted over 9,000 fans over the course of three days (January 29-31). On day three, they revealed their long awaited fandom name, MeU, which the members themselves came up with and had been teasing since their fan meeting last year. In honor of their first concert and new fandom name, let’s check out some of f(x)’s best b-sides.

This song was on the list of every fan I have spoken to, and it’s not hard to see why. It’s the type of song that you can relax to and put on repeat. The lyrics tell of someone who wants love, but warns of that person’s “paper heart.” The vocals, as with every f(x) song, is what really makes the song enjoyable, from Sulli‘s sweet voice to Luna‘s powerful tone. Having “Paper Heart” on your playlist is definitely worth it.

Another fan favorite, “Beautiful Goodbye” also appeared every fan’s list of top songs. In this song, we hear the girls talk about memories of a first love that ended and the emotions that come back after thinking of the past. This track highlights Sulli’s and Krystal‘s vocals, both of which really suit the mood of the song. It is a must listen if you are into soothing ballads.

This one is a personal favorite of mine, which is surprising since I am no real fan of horror films, but right away it pulls you in. From the intro to the simple yet catchy chorus, “Dracula” is a track that fits into f(x)’s image and overall concept. It’s one song I was looking forward to seeing them perform, and thankfully they did at their concerts.

Member Amber wrote this song about friends who regret never telling each other their true feeling. It features EXO‘s D.O, whose vocals seamlessly mesh with Luna’s and Krystal’s, making the song even sweeter. From Amber’s rap to Luna and D.O’s bridge, “Goodbye Summer” is a song that is perfect for winding down after a long day…or when you’re in the mood to hear some great vocals. Be sure to listen to the English version, “Just Wanna,” from Amber’s album that features her very own bestie Eric Nam.

Taken from their 2009 single album, “Step By Me” is about a girl telling her crush to tell her how he feels since she feels the same. It’s a fun song that will find you wanting to skip around while singing it..or is that just me? I love bubbly songs and this is one that never gets old for me.

This track, which features Block B‘s Zico, is about the desire to travel farther than one’s own backyard without any restrictions or clear destination. One listen and it can easily become a favorite travel song. Zico’s rap goes well with the girls’ vocals in their verses and makes you want another Zico-f(x) collaboration (Luna recently lent her vocals to Zico’s “It Was Love”).

“Jet” is a song that talks about how fast someone has fallen for the person they like and their feelings toward that person. This is arguably one of my favorites from f(x); I love the vocals and the overall feel the of the song. From Victoria’s lines to Amber’s parts in the chorus, “Jet” is a song that will make you sing along.

Out of the songs from f(x)’s “Pink Tape” album, “Shadow” is usually in fans’ top five, and with good reason; it has a magical or mysterious feel to it. The song is sort of sweet, with the lyrics saying how you and the person you like are one, and that you are like a shadow by being and walking with the other person. Amber and Krystal really stand out in this one, although they all command attention throughout the song.

Oh the f(SHINee) feels! I’m not sure how anyone really feels about this song, but I love it and all its energy. Listening to a song about the excitement that comes with developing feelings for someone and having it be very upbeat is what I enjoy about “Lollipop.” All the members of both groups are present, but Key and Amber stand out the most and the chorus makes this a very catchy track.

A song with a nice throwback feel that takes me back, “All Night” manages to give that old school feel without being too dated. You can easily get into the groove of things when Sulli sings about the twinkle in one’s eyes and Amber raps about feeling so high whenever your love holds your hand. If you’re ever feeling nostalgic and want to listen to a song that describes a light feeling of love, this one is for you.

A song that seems more underrated than the others on “4 Walls,” “X” continues with that retro ’70s feel that “4 Walls” has. It’s about the sudden and explosive chemistry that comes from a simple touch from someone and your inability to hide it. I haven’t really found any f(x) song that doesn’t suit any of the members’ vocals and “X” is no different; it somehow manages to match each of the members’ vocal colors perfectly without anyone standing out in a bad way. Just like “Paper Heart,” this song also has a relaxing feel which makes it an easy listen.

There you have it, 11 amazing tracks that took me hours (Yes, hours!) to narrow down; I know I still missed out on so much.

What is your list of top f(x) b-sides? Do you have a totally different list? Let me know, MeU!

LavelyShai is your average K-Pop fan who is now patiently awaiting Ladies’ Code’s return. Want to read about her other faves? Follow her on Twitter!