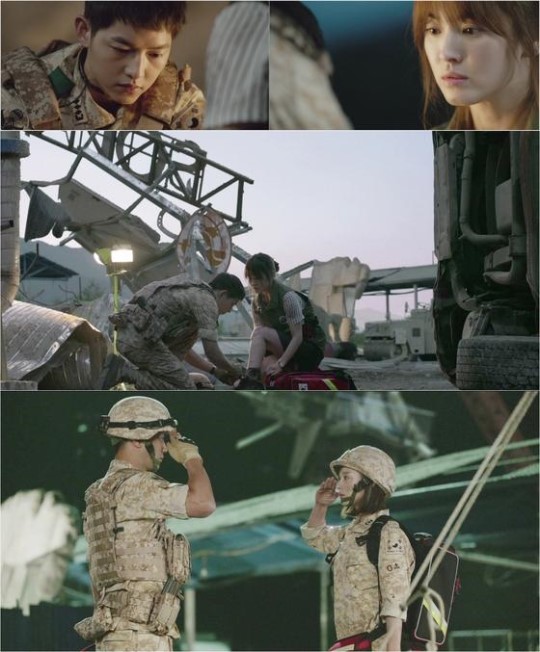 On February 5, KBS2’s new Wednesday-Thursday drama, “Descendants of the Sun,” released its main trailer. With the voice of a news reporter broadcasting that “an earthquake of 6.7 magnitude has just occurred,” the trailer begins with people evacuating between collapsing buildings, and the dire situation of trying to save those who are injured.

The main trailer portrays a completely different atmosphere to the previously released “That Man’s Story” and “That Woman’s Story” trailers, which showed the personalities of Yoo Shi Jin (Song Joong Ki) and Kang Mo Yeon (Song Hye Kyo), and their “some” relationship. Those trailers raised the expectations for a sweet melo to unfold between the “Song-Song couple,” through the refreshingly cool dialogue, the work of script writer Kim Eun Sook. In contrast, this trailer shows the stories of people trying to overcome extreme situations where lives are in danger, like a sudden earthquake, or the ground collapsing as a result.

Soldier Yoo Shi Jin narrates, “I am a soldier. A work that someone must do,” while Doctor Kang Mo Yeon says, “Life is dignified, and it does not hold value or belief beyond that,” suggesting a dissonance between the two’s values and goals. The trailer ends with the line, “so are you telling me to choose right now, who to save and who to kill between the two,” portraying the message that “Descendants of the Sun” wants to deliver, a message about the value of human life.

The producers explain that “‘Descendants of the Sun’ attempts to show that humanity can make a miracle happen, even in the midst of despair, through the stories of people who band together to overcome the agony following an extreme situation” and that “we want to tell a different and meaningful story, as well as provide something fun and new for our viewers.”

Directed by Lee Eung Bok, and written by Kim Eun Sook and Kim Won Suk, “Descendants of the Sun” will air its first episode on February 24, at 10 p.m. KST. It is 100% pre-produced, unlike other Korean dramas, and will be released in Korea and China simultaneously. Watch it exclusively on Viki when it comes out!