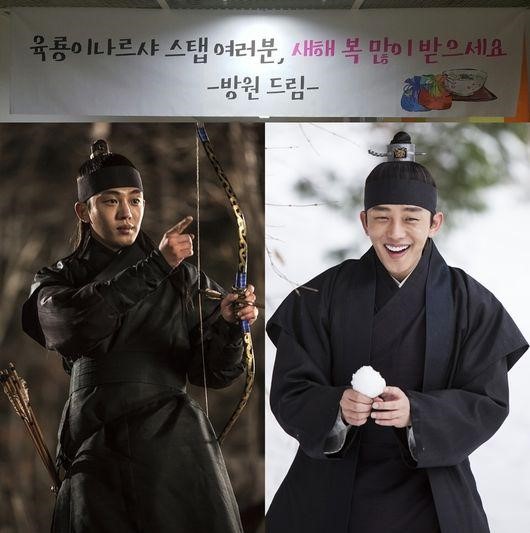 Yoo Ah In was one of the most busiest, and successful actors of 2015. He’s continuing that success into 2016. Currently, he is known for enthusiastically acting as the romantic Lee Bang Won in the SBS’s “Six Flying Dragons,” which is first place in ratings for Monday-Tuesday dramas.

With Lunar New Year just around the corner, Yoo Ah In gifted bedding sets from the brand SESA Living, and sneakers from Reebok to each of the staff members. He is currently the endorsement model for both brands.

He prepared these gifts for the staff who, for over eight months, have traveled to every nook and cranny of the country in order to film. Yoo Ah In personally paid for all these gifts with his own money, making it even more heartwarming.

This is not the first time Yoo Ah In has shown his love for the staff. Right before the winter chill hit, Yoo Ah In warmed the hearts of everyone on set when he presented the whole staff of “Six Flying Dragons” with staff uniforms from the clothing brand Jeep Brand, which he is also the endorsement model for. The staff, thankful for the tokens of Yoo Ah In’s special love, continue to film with newfound strength and energy.

In addition, Yoo Ah In will also star in the movie “Please Like Me,” which will be released February 18. Many expect him to continue to shine in 2016.

Watch the latest episode of “Six Flying Dragons” below!

Six Flying Dragons
Yoo Ah In
How does this article make you feel?