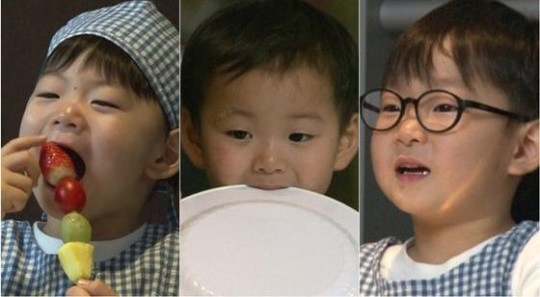 At the end of 19 months, through tears and laughter, the time to say goodbye to Song Il Gook and Daehan, Minguk; and Manse has come.

On this day, Song Il Gook, who originally agreed to the show in order to give his wife a break, remarks that he “wants to spend the last day of filming dedicated to Mom, who was the catalyst for our appearance,” and selects delivering lunch boxes filled with love to his wife, Jung Seung Yeon, as their last mission.

The triplets gather their strength together to skewer fruit onto sticks in order to give them to their mom. Like the mukbang (also known as eating broadcast) babies they are, Minguk and Manse eat the fruit instead, behind their father’s back, making everyone at the scene laugh at their high-level eating skills.

Afterwards, each of triplets grab a lunchbox in their hands, and go around yelling their mom’s name, each pulling his own weight in order to successfully deliver the lunch boxes. 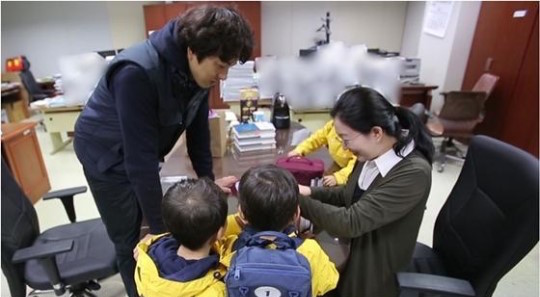 Song Il Gook and the Song triplets also reveal their thoughts about their last filming. Song Il Gook especially shows his great affection for the show, when he responds, “‘The Return of Superman’ has been the greatest gift in my life.”

Manse reportedly says, “if we are sad, then dinosaur uncles (how the triplets refer to the cameramen) will be sad too,” showing a mature image, completely different to the Manse from the very first meeting with the staff, 27 months ago. He touches the hearts of all the staff who have been with them since the very beginning.

The production team behind “The Return of Superman” says, “the viewers, and the staff, will most likely never forget all the memories of the Song triplets and Song Il Gook are leaving behind on this show,” and that “it was hard to hold back tears when the staff saw the bright and energetic Daehan, Minguk, and Manse. Please look forward to the matured Song triplets in their last episode.”

The last episode featuring Song Il Gook and the Song triplets will air this Sunday, at 4:55 p.m. KST.

Catch up on the latest episode here:

Song triplets
Minguk
Manse
Daehan
The Return of Superman
Song Il Gook
How does this article make you feel?