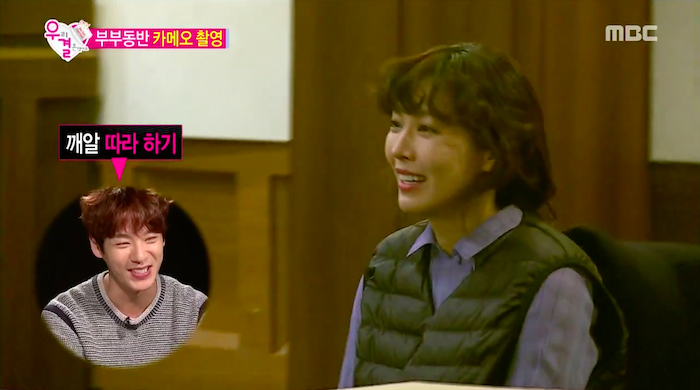 Watch: Kwak Si Yang Praises Kim So Yeon’s Acting on “We Got Married”

On February 6’s episode of MBC’s “We Got Married,” actors Kwak Si Yang and Kim So Yeon film a cameo appearance for a drama together.

Kim So Yeon prepares herself for the role in perfect costume and makeup for the role. She seems nervous before the shoot, but she portrays her part perfectly as soon as “action” is called.

Kwak Si Yang also portrays the fickle and irresponsible role of a husband who was caught having an affair.

Kwak Si Yang comments about Kim So Yeon’s acting, “I felt as though I was watching her as an audience member. She prepared for the role in detail. She fell into the character right away and came back to being Kim So Yeon herself as a person as soon as she heard ‘Cut.’ I respect her for her work.”

Kim So Yeon adds, “I would’ve felt weighed down if I was all alone on the set. My hands would shake from being nervous. But whenever I made eye contact with my husband, it felt good to have someone to depend on.”

Watch the dynamic performance of Kim So Yeon here.