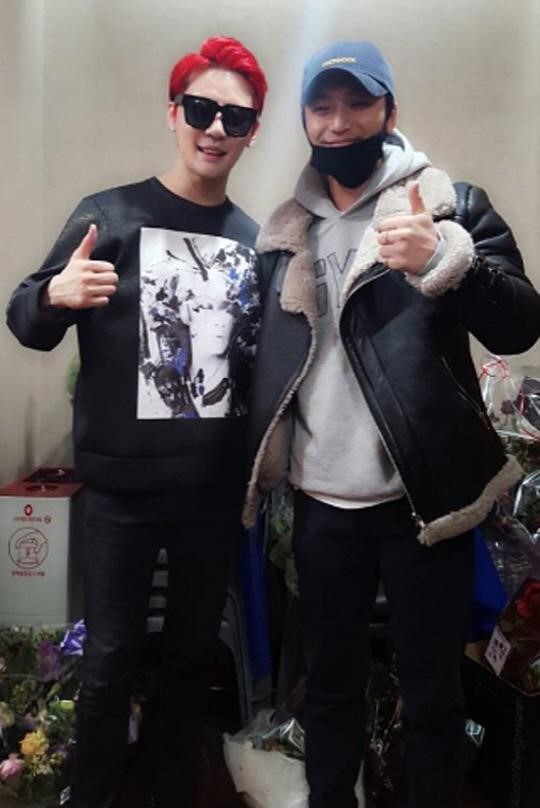 On February 8, JYJ‘s Junsu posted a picture with Byun Yo Han, who came out to support the musical “Dracula.” His caption says, “My friend Yo Han-ssi, whom I really like, even though it’s still a little awkward between us, came to see the musical “Dracula”~ Hoping for the day where I won’t have to add -ssi (a formal way of addressing someone in Korean) at the end of your name…let’s become closer one day at a time~ Ah, but I really like this man’s personality…” showing off the affection that Junsu already feels for his new friend.

The two catch people’s eyes for their casual clothes and sharp looks that are still noticeable, even though Junsu is wearing sunglasses and Byun Yo Han has a hat and mask on.

Later on, Junsu uploaded two more pictures of Byun Yo Han, continuing to emphasize how much he likes Byun Yo Han, and also showing his support for “Six Flying Dragons.”

“A picture of Yo Han-ssi who flew over before the start of the show. I really like this person. I just really do. I’ll watch Yi Bang Ji through live broadcast today~~~~”

The musical “Dracula,” ends its run this Lunar New Year weekend, with its last performance on February 9. It tells the story of Dracula, played by Junsu, and his love story that transcends time.

Watch the latest episode of “Six Flying Dragons” below!

Byun Yo Han
JYJ
How does this article make you feel?