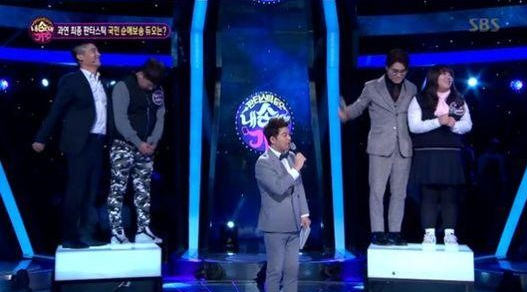 On February 9, Park Myung Soo, Jang Yoon Jung, Lim Chang Jung, and Kim Bum Soo participated in the SBS pilot variety program “Fantastic Duo.” The show operates under the premise that anyone with a cell phone can stand onstage with a nationally recognized singer, pairing amateur singers and non-celebrities with the four singers to sing a duet version of their most famous songs.

The partners for the final performance were chosen through a 1 vs. 3 random competition. Park Myung Soo was paired with the four-member team “Four Ssaem.” Together they sang his song “To Fool From Fool,” showing off a beautiful orchestral arrangement as well as amazing harmonization.

Jang Yoon Jung was paired with the 74-year-old “Chilsoon Taxi,” whose real name was Seo Byung Soon. Together they sang her song “First Marriage” and Jang Yoon Jung burst into tears during the performance. “I cried because I felt the lyrics reflected his story,” she said later. “My partner comforted me with his eyes. I’m so sorry to him for crying during the song.”

However, the deciding battle came down to veteran singers Lim Chang Jung and Kim Bum Soo. Lim Chang Jung sang “A Glass of Soju” with his partner “Delivery to the Max.” While Lim Chang Jung has always been known for his emotional and powerful vocals, his partner impressed the audience by pulling off some of the higher notes and they took home a total of 275 points.

Kim Bum Soo was paired with “Fish Cake Girl,” a high schooler named Kim Da Mi. The two of them sang “Last Love” and deeply moved the audience, taking home 277 points and winning the competition. Kim Da Mi took home a trophy and her version of “Last Love” will be released as a digital single. 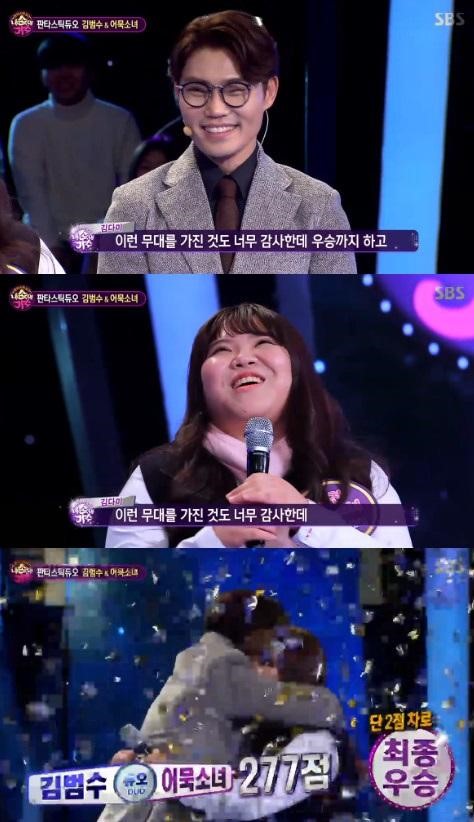 “I heard a new side of the song today,” Kim Bum Soo said at the end of the performance.

“I was lucky just to stand onstage with him,” Kim Da Mi said. “I think it’d be fine now even if I didn’t go to university.”