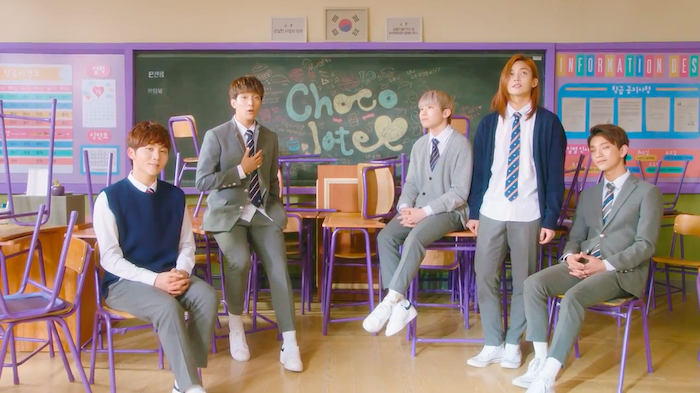 Yoon Jong Shin has recruited the vocal line of SEVENTEEN for the latest track in his famous monthly project!

SEVENTEEN members Junghan, Joshua, Woozi, DK, and Seungkwan lend their voices to Yong Jong Shin’s monthly track for February, entitled “Chocolate,” which was dropped on February 12 at midnight KST. The song is the perfect track for Valentine’s Day, as the guys shyly confess their love for a girl in their class and try to woo her with chocolates in the music video. Yoon Jong Shin also stars in the video as their teacher.

Yoon Jong Shin writes that he aimed to capture the retro feeling of the 1980’s in the song, and was inspired by artists such as Kool & the Gang and El DeBarge, which he listened to when he was in his late teens.

He says, “To be honest, I was a bit worried when I recruited SEVENTEEN for this project. I worried about whether they’d be able to carry off the style, since they were born after it was popular, and also because they are rookies. However, my worries were all unfounded. I was so surprised because they sang it exactly as I wanted without me having to give much direction.”

SEVENTEEN
Yoon Jong Shin
How does this article make you feel?