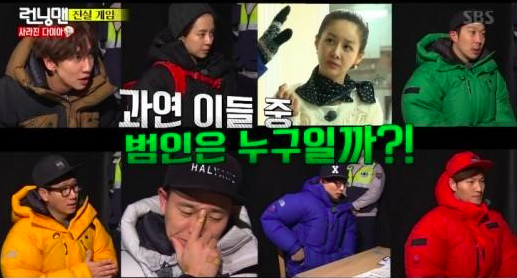 The February 14 broadcast of SBS’s “Running Man” featured a Sherlock Holmes-style mission in which the members were charged to find the culprit behind the theft of a precious diamond necklace.

At the beginning of the episode, Lee Kwang Soo received an invitation asking him and the “Running Man” members to come to a mountain resort, all expenses paid. At the resort they found a dance party, an outdoor barbecue, and the resort’s “owner,” actress Kim Ga Yun.

However, during the course of their stay, Kim Ga Yun’s “precious” diamond necklace that is supposed to be worth about 20 billion won (approximately $16.5 million) was stolen. In the four hours before the “police” arrive, the “Running Man” members scouted out clues to solve the whodunnit.

Each of the “Running Man” members had had a reason to go into Kim Ga Yun’s room before the incident, while the case is further complicated by the “murder” (nametag removal) of two staff members at the resort. Several hints seemed to indicate a woman was involved, throwing suspicion on Song Ji Hyo, while the members looked askance at Lee Kwang Soo because of his suspicious invitation.

“Every week I’m suspected of something,” Lee Kwang Soo said in outrage. “Someone among our members is using this to their advantage.” When he checked the invitation, he found that the stamp had come from Mapo-gu and deduced that the culprit must be Haha.

Yoo Jae Suk, on the other hand, had read the guest list, where there was someone labelled “younger sibling.” “This suspicious ‘younger sibling’ is probably the culprit,” he said. 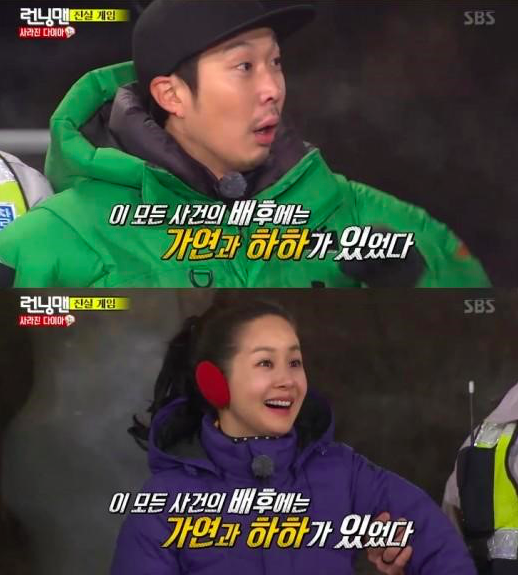 In the end, the culprits turn out to be Kim Ga Yun and Haha! The two of them are “siblings” whose father had decided to donate all his inheritance to charity in his last will and testament. Angry at their father’s decision, they decided to pretend the diamonds were stolen in order to collect the insurance money.

Did the culprits turn out to be who you thought? Watch the episode below:

Kim Ga Yeon
Running Man
How does this article make you feel?