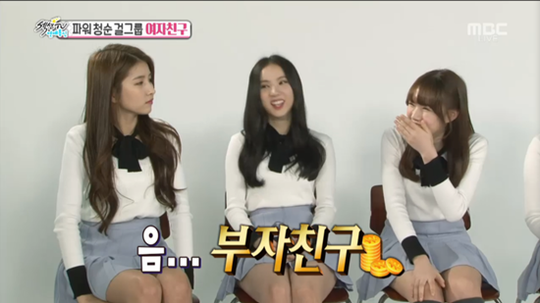 The February 14 broadcast of MBC‘ “Section TV” aired an interview with GFRIEND to discuss a variety of topics from aspirations to bad sleeping habits.

It was revealed that out of the six members, Yoojoo had the worst sleeping habit. Yerin shared a story one time when Yoojoo was sound asleep until she suddenly said “Yes, Hello!” (very formally). A flustered Yoojoo then explained that she was simply bowing politely to a production staff member in her dream.

GFRIEND also listed that “Happy Friend,” “God Friend,” or even “Just Girls” when they get really silly on TV were some of the nicknames that their fans call them. The reporter then asked them if there was a nickname that they wanted, to which Yerin responded, “Rich Friend,” and caused everyone to explode in laughter.

GFRIEND then talked about their desires to become like the group Shinhwa who are known for their friendship and strong unity as a group. GFRIEND also announced that the setting for their interview was the location for their third group advertisement deal. They then mentioned that they would like to shoot an advertisement for dairy products in the future and showed off a refreshing pose of themselves pretending to drink milk.

Watch a part of the interview below!