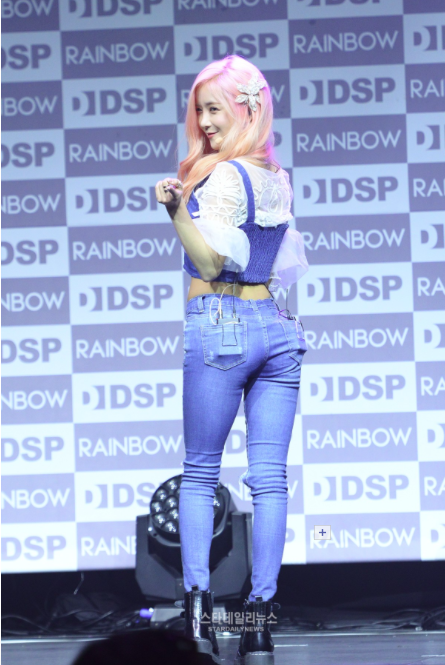 Rainbow’s Hyunyoung assured that her relationship with Alex is better than ever, and her new song has nothing to do with him.

On February 15, the opening showcase for Rainbow’s fourth mini album “PRISM” was held. All the members were present for the event, and Jisook and Kim Saeng Min, her partner in KBS2’s “Entertainment Weekly” were the MCs.

When the members said, “Hyunyoung, our youngest, even wrote her own song,” Kim Saeng Min complimented her saying, “I thought abs were your specialty.”

“We don’t releases songs one after another like other groups, so we’ve had several hiatuses,” Hyunyoung said. “I was wondering what I should do in my spare time, and I decided to learn song writing two to three years ago. I showed my song to my members, and we ended up adding it to the album because they liked it.”

Kim Saeng Min asked about Alex by saying, “The song seems to be about love, and aren’t you currently seeing someone right now?”

Jaekyung teased, “It’s about cheating though,” and Hyunyoung clarified, “It’s only a song. Nothing more.”

The album contains a total of six songs. “Whoo,” the title song of “Prism,” is a rock dance song with a retro melody line. “Things I Want to Tell You” is a soft ballad, while “Black&White” is an intense dance song that highlights the group’s vocal skills. The witty lyrics of “Click” and Hyunyoung’s self-made song, “Eye Contact,” are especially notable as well.

Support the artist by buying Rainbow- Prism from YesAsia

Hyunyoung
Star Daily News
Alex
Rainbow
How does this article make you feel?