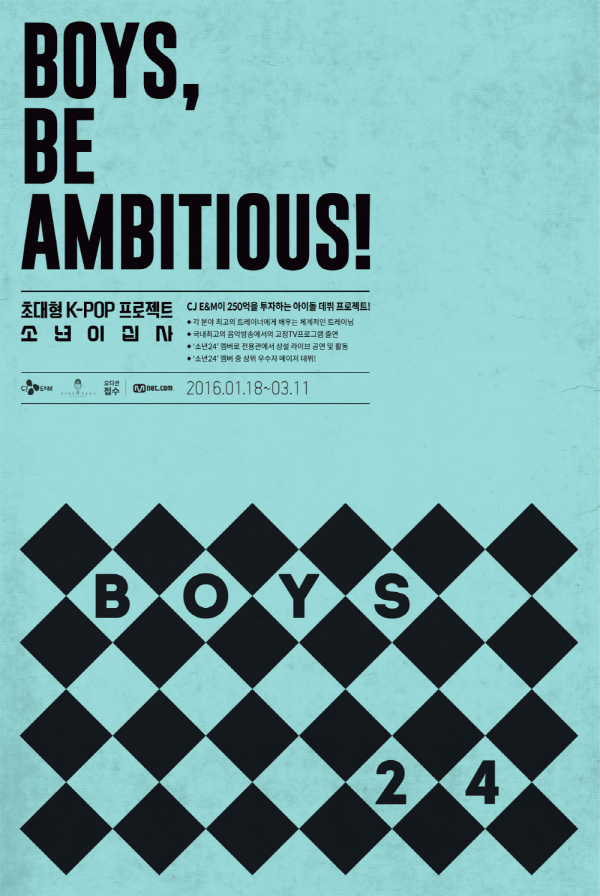 After first announcing male group project show “Boys24” in January, the show is gaining more attention with the success of the currently airing girl group survival show “Produce 101.” CJ E&M has revealed further details that has got viewers highly anticipating the show.

“Boys24” is a large-scale K-pop project lead by CJ E&M and Liveworks Company (Shinhwa members Shin Hye Sung and Lee Min Woo’s agency). The project has been in works for three years and has had 25 billion won (approximately $20.5 million) invested into it. After auditions and training, the project aims to select 24 members. The goal is to create a unique project blending K-pop and musical performance and be a part of a different type of Hallyu culture.

From cousins of famous idol members as well as trainees from notable agencies like YG, JYP, SM, Woolim, Jellyfish, Mystic, Loen, DSP, and Chinese YueHua Entertainment have applied. Also, applicants with musical, theatre, and film backgrounds will be included as well.

Furthermore, applicants from foreign countries are applying through Mwave. You can apply here until March 11.

A “Boys24” representative commented, “The ’24’ in ‘Boys24’ not only refers to 24 members, but also to how you can enjoy Hallyu content 24 hours a day, 365 days a year. We expect that the K-pop and performance fusion content will become a new Hallyu business model. We plan on investing and supporting the new Hallyu content to become a new type of Hallyu culture that targets both domestic and global audiences.”

The final “Boys24” members are scheduled to start holding performances in Myeongdong this August.

BOYS24
CJ ENM
How does this article make you feel?