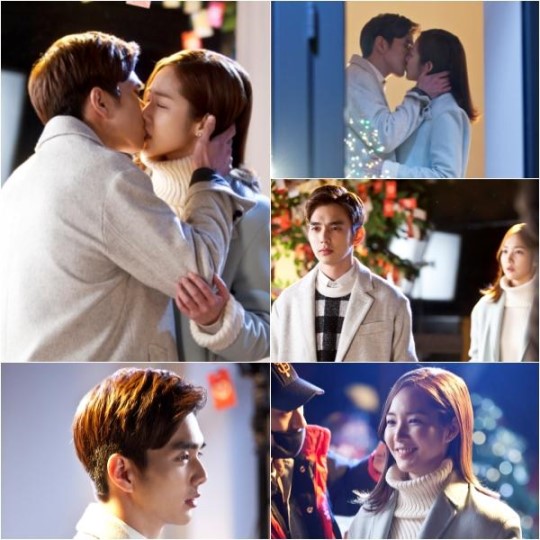 SBS drama “Remember” has revealed behind-the-scenes stills and some fun secrets regarding their recent kiss scene.

On episode 18 of the drama that aired on February 11, Jin Woo (Yoo Seung Ho) and In Ah (Park Min Young) shared a sweet kiss. This was the first step in their relationship as lovers rather than close friends.

This kiss scene was actually not included in the script and was impromptu. In the script, it just said that Jin Woo gazes into In Ah’s eyes and gives her a hug. During the actual filming day, however, the director said the audience needs to know that their relationship has advanced and suddenly changed the hug scene into a kiss scene. Both Yoo Seung Ho and Park Min Young were a bit surprised, but they filmed the scene professionally after discussing it thoroughly with the director.

Yoo Seung Ho seemed especially shy having to lead the kiss scene. However, when the camera started rolling, his gaze changed and he perfected the kiss scene with his manly charms. The staff complimented, “Jin Woo turned very manly in the kiss scene.” When the director shouted, “Cut!” Yoo Seung Ho turned completely shy again and made everyone laugh on set.

The production staff stated, “Thank you to everyone who has gone through Jin Woo and In Ah’s long journey together. Please look forward to how their story will end soon.”

Watch the kiss scene in the video below!