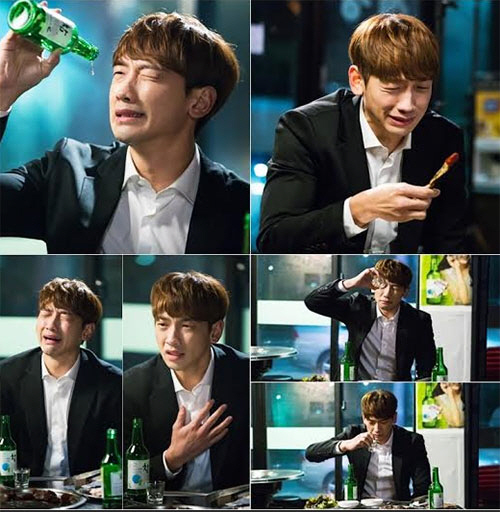 Rain Shows Off His Humorous Charms in “Please Come Back, Mister” Preview Stills

The upcoming SBS drama “Please Come Back, Mister” has released some preview stills of Rain, who will be playing two roles of Lee Hae Joon, originally an over-working man in his 40s that got reincarnated as a son of a big enterprise CEO.

For this drama, Rain will be bringing out his comical side to realistically portray his humorous character. In the preview stills, his character looks like he’s having a mental breakdown. Rain’s comical way of clearing the drinks will make the audience laugh for sure.

On the day of filming this scene, Rain came to set early in the morning and seemed eager to start acting despite being busy. He talked thoroughly with the director and made the staff members laugh with his humorous actions during the rehearsal.

When the actual filming began, Rain added many ad-libs and improptu stunts that made it hard for the staff members on set to hold in their laughter.

The production team in charge of the drama stated, “Jung Ji Hoon (Rain) is going all in for this drama. His character will be both comical and emotional. Please look forward to his appearance.”

Meanwhile, “Please Come Back, Mister” will air on February 24 after “Remember” finishes its run.