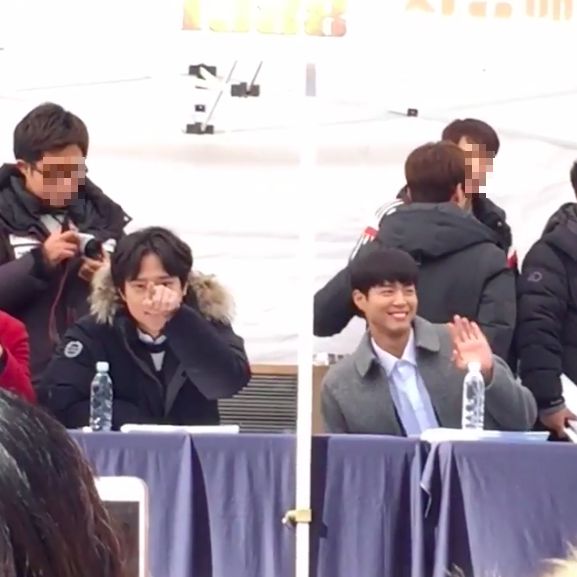 Actors Park Bo Gum and Ko Kyung Pyo from the much-loved tvN drama “Reply 1988” have shown their love for fans!

In the afternoon on February 15, the stars of “Reply 1988” fulfilled a ratings promise by holding an autograph event at Jeongeui Girl’s High School in Ssangmoon-dong, the location where much of the show is set. They had previously promised that they would meet with fans and sign autographs if the show gained over 18 percent in the ratings.

Although the location and time of the event were supposed to be kept secret, news broke online about where it was to be held, and fans headed to the school the day before. Only 100 fans were to be admitted into the autograph event, and by 11 p.m. KST the night before, it was reported that all the spots were already filled.

Some of those lucky fans have shared videos of the event. In one video, Park Bo Gum waves at the crowd, while Ko Kyung Pyo talks to the fan taking the video and points at them.

In another video, Park Bo Gum waves and smiles hugely at the fan who’s been filming him. He looks like he’s about to make a heart sign with his hands, but then looks embarrassed and just laughs instead.

Meanwhile, Park Bo Gum and Ko Kyung Pyo will soon be starring alongside Ahn Jae Hong and Ryu Jun Yeol in the next season of “Youth Over Flowers,” which airs its first episode on February 19.