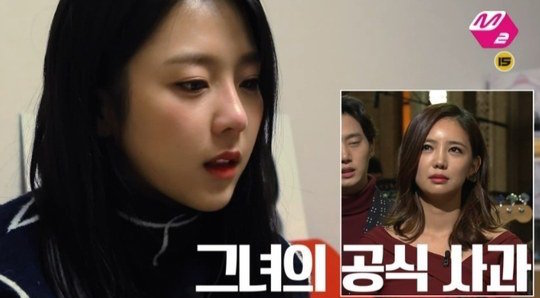 Yewon Expresses Her Thoughts on Her Scandal With Lee Tae Im

Yewon has confessed her feelings about her scandal, where she was criticized for the way she spoke to Lee Tae Im, for the first time on February 15, through Mnet‘s “M2.”

Yewon reveals that she watched Lee Tae Im’s appearance on SNL Korea. She confesses, “I sent her a text after watching SNL that said ‘This is Yewon. Please call me if you have the time. I’ll be waiting.’ And she really did call. Her voice seemed really bright, and she asked me why I didn’t come out on television anymore. I’m relieved because it seems like she’s doing a lot better, but on the other hand, how should I say this, I’m kind of jealous.”

Yewon continues on, and explains, “I saw the video (that caused the scandal) myself. It was like seeing myself for the first time. There was a part of me that couldn’t recognize how curt my words were. After watching the video, I realized exactly how I acted,” and reveals, “I think that those words came out in the heat of the moment, without me realizing it. If I could relieve that situation, I think I would have apologized right away.”

To the producers, Yewon, while crying, says, “Why did you ask me to appear on M2? At first, I couldn’t believe it. Even now, I can’t believe it,” expressing her gratitude.

Watch her express her feelings, as well as apologize, below.

“M2” is Mnet’s digital content channel, which is where Yewon will be making her TV comeback as an MC. The channel delivers content to audiences through web portals and social media sites.