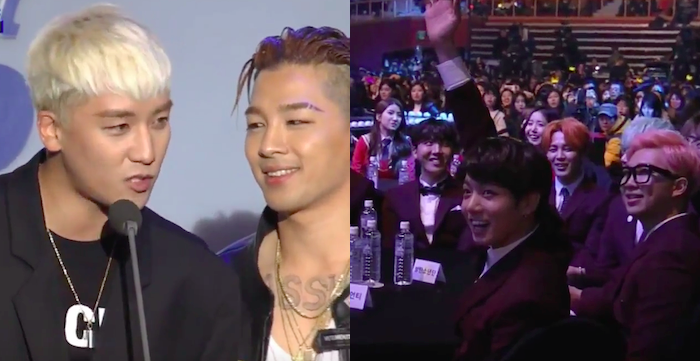 Watch: BIGBANG’s Seungri Gives a Shout Out to All the Maknaes Out There at 5th Gaon Chart K-Pop Awards

When BIGBANG goes on stage to accept their Artist of the Year (Song – June) award for “Bang Bang Bang,” Seungri takes the chance to jokingly get some things off his chest.

He first thanks the fans, and then adds that he’s also grateful to himself. “It’s been a long time since I’ve thanked myself, I think the last time was five years ago when I was a bit arrogant and out of my mind. In remembrance of that time, I’d like to thank myself,” he jokes. Seungri previously thanked himself when he won first place as a solo artist on “Inkigayo” back in 2009.

“This demanding society and these demanding activities as a group with BIGBANG are really difficult!” he yells, while G-Dragon covers his face as he laughs and Daesung grins. 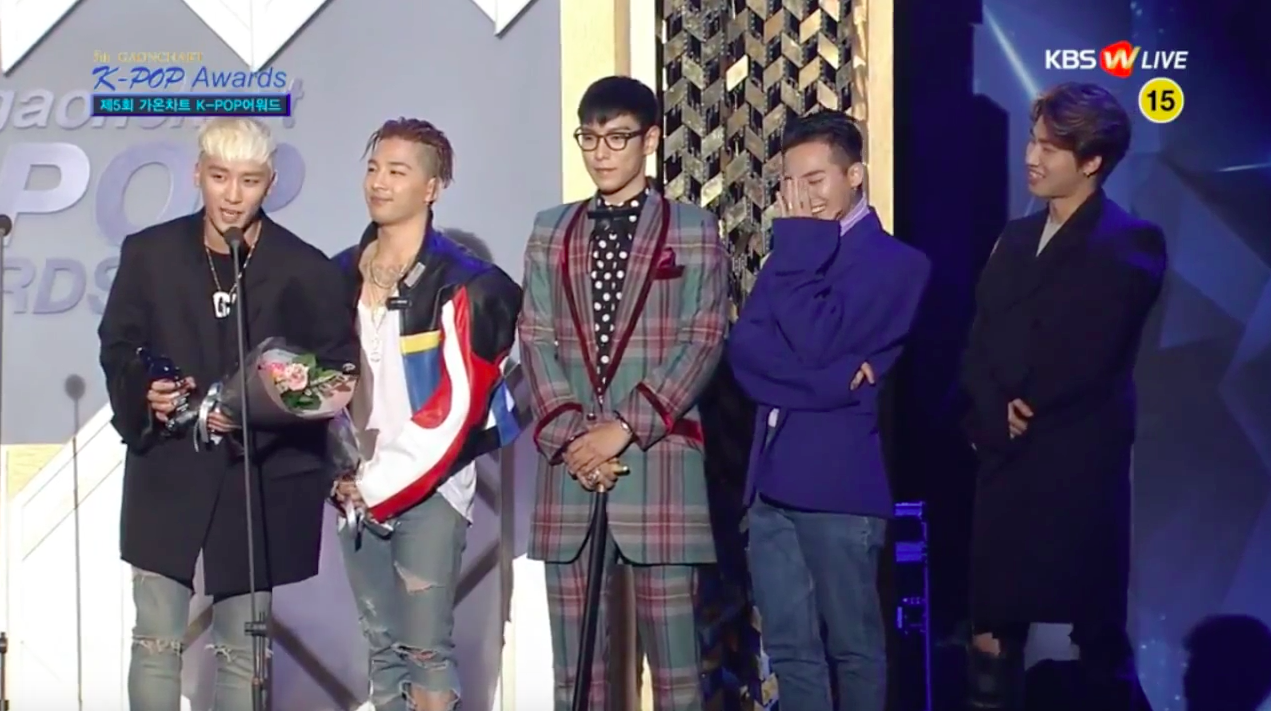 “There are some junior groups here,” Seungri continues. “All the maknaes, raise your hands! It’s hard, right? I understand!”

The video then cuts to BTS’s Jungkook eagerly raising his hand in the air, and VIXX’s Hyuk shyly holding up his own. 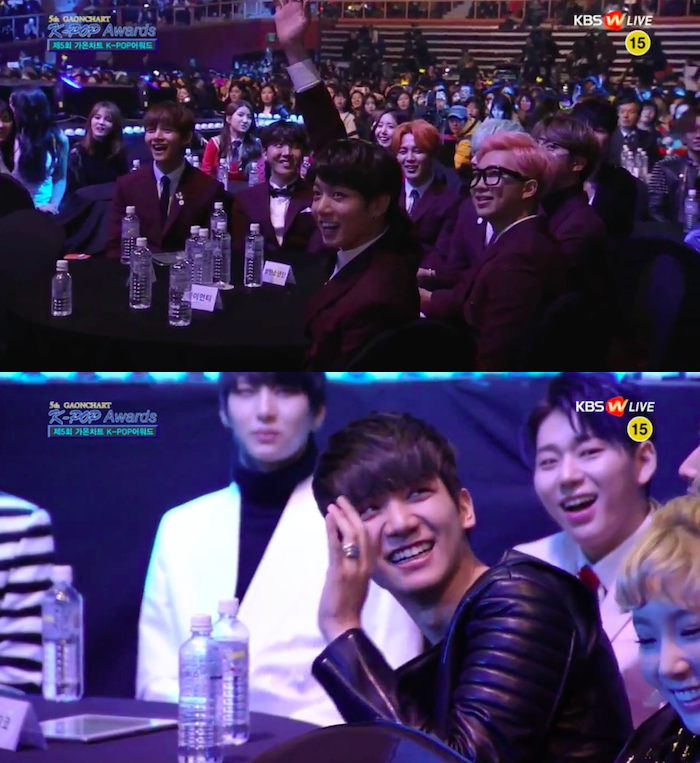 Host Leeteuk of Super Junior then says to Seungri, “Your members look a bit embarrassed!”

Seungri says, “Anyway! I’m very grateful to G-Dragon for always writing us cool songs, and to T.O.P for always raising me toughly. I want to take this chance to say that I love you. Also, thank you to Taeyang who tells me to practice singing. I will work hard so that I can be a better singer. And to Daesung for always smiling. You really give me strength!”

Daesung takes issue with this, and Taeyang encourages him to express his feelings into the mic. Daesung says to Seungri, “You’re just thanking me for smiling? There’s nothing else?” 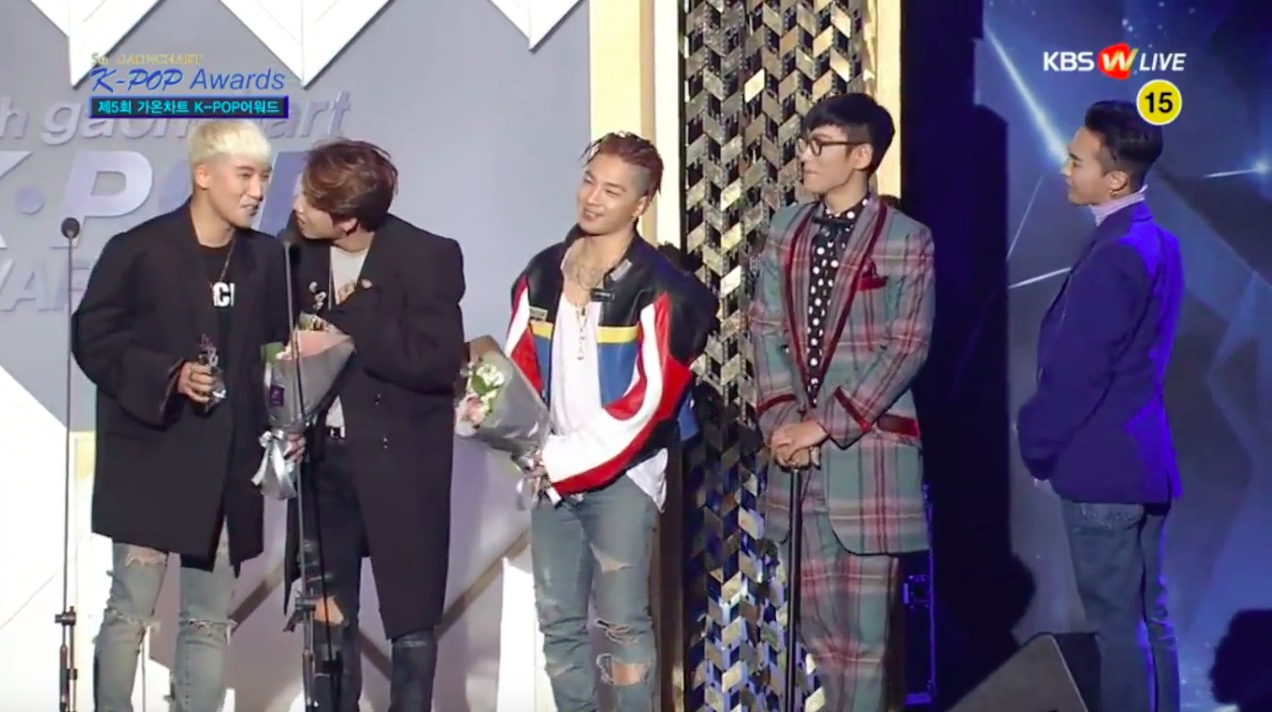 “You really give me strength with your smiling face,” replies Seungri confidently, and Daesung pretends to sulk as he walks away.