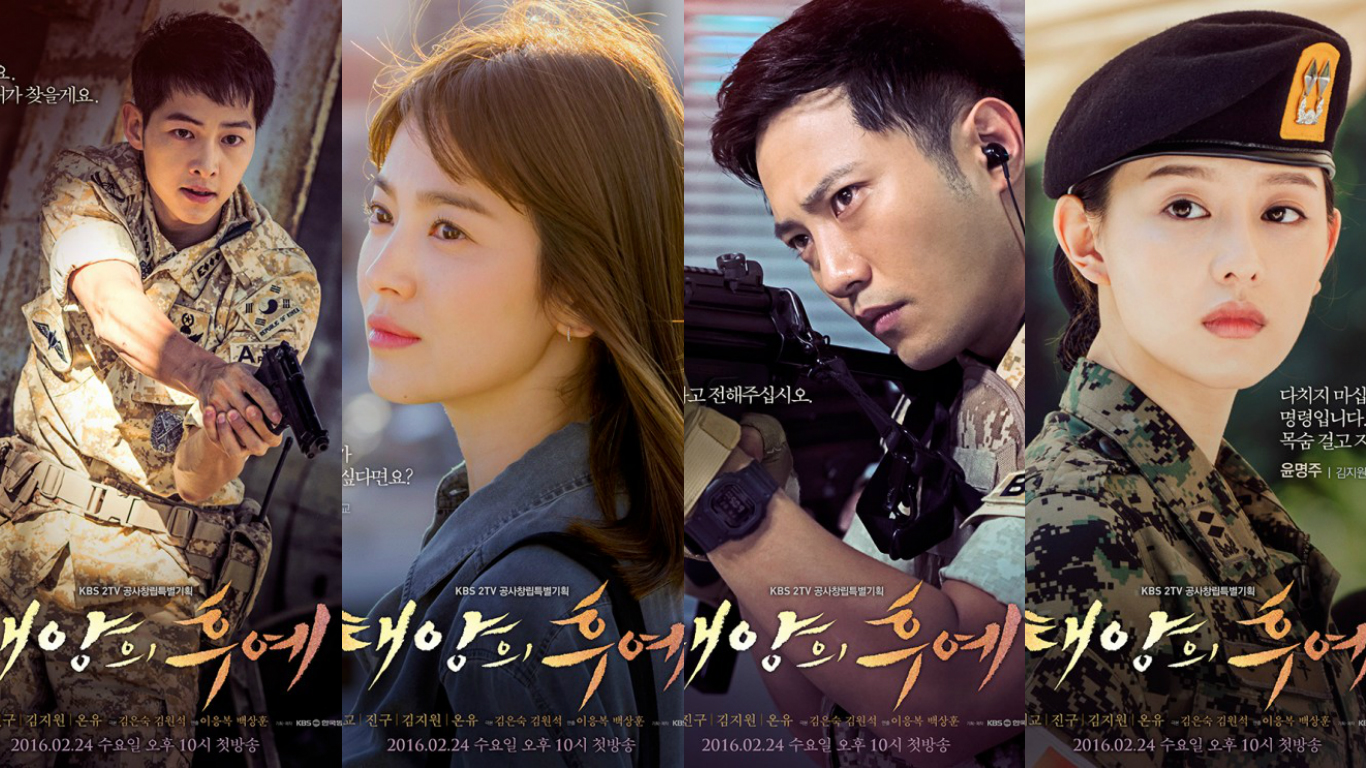 “Descendants of the Sun” Reveals Individual Character Posters and Descriptions

KBS2‘s new Wednesday-Thursday drama,”Descendants of the Sun,” takes place in the unknown land of Uruk, and tells the tales of soldiers and doctors who are dispatched to a disaster-torn country. It is a human melodrama that shows how even in the midst of calamity, people can love and band together in solidarity.

On February 17, the individual posters for Song Joong Ki, Song Hye Kyo, Jin Goo, and Kim Ji Won were released, and each of the characters’ appealing points were revealed as well. 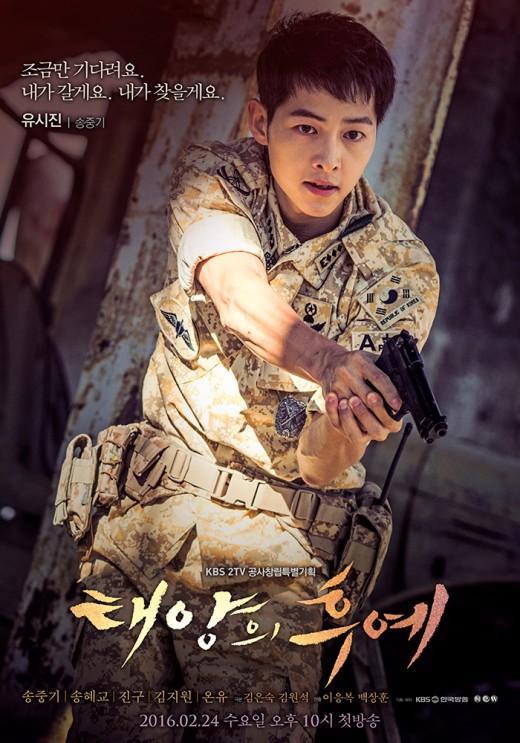 “Just wait a little longer, I will go. I will find you.”

Song Joong Ki, who has returned as a “real man,” will be playing the role of Captain Yoo Shi Jin, an elite special forces soldier with a military academy background. His father, who was honorably discharged as an army major sergeant, wanted a different path for his son, who was skilled in both academics and athletics. However, Yoo Shi Jin, who highly respected his father, decides to follow the same path. His belief that children, the elderly, and pretty women must be protected, his courage that allows him to speak up to high schoolers who smoke on the street despite his fear of them, and his common sense that tells him wrong is wrong even when a gun is pointed at his temple, are all a part of Yoo Shi Jin’s wish to protect his love for his country, and a soldier’s honor. He’s a lively man who is always confident, and depending on the situation, is witty and likes to joke around. 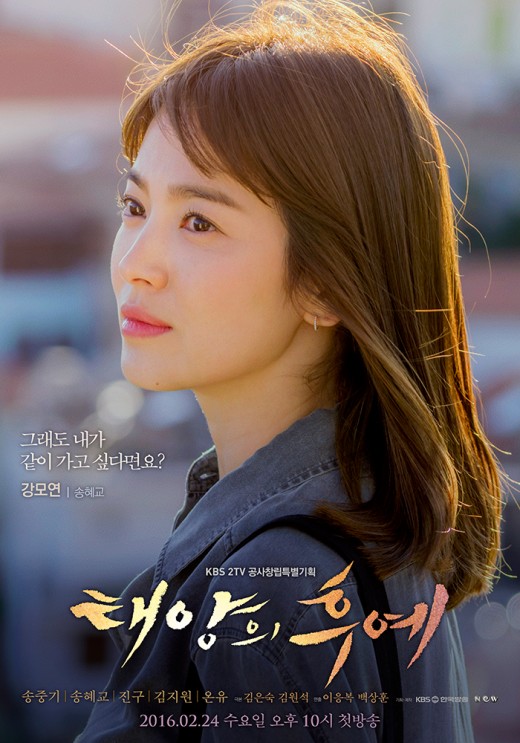 “What if I still wanted to go with you?”

Song Hye Kyo, whose acting is even more beautiful than her face, will be playing the role of Kang Mo Yeon, a level-headed doctor. Specifically, she’s a cardiothoracic specialist who has the greatest abilities but believes that private practice in Gangnam holds more truth rather than the Hippocratic oath. It’s because her life has been twisted since her birth, and although she excelled in her studies and ruthlessly finished medical school to become a specialist at age 29, she realizes the sad truth that there’s no business for her without any connections. She believes that because of survival of the fittest, she has no “lame humanism” within her. She says everything that’s on her mind, and has speaking abilities that don’t lose to anyone else’s. Kang Mo Yeon is a person who holds a lot of pride in her abilities, but straightforwardly acknowledges her mistakes. 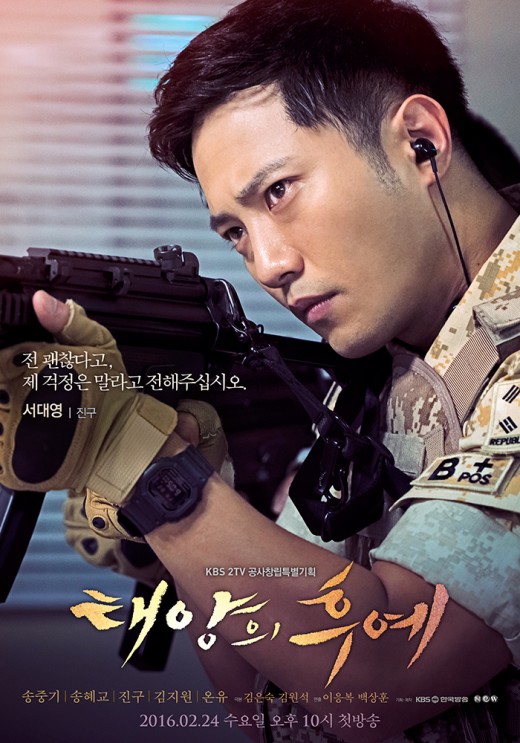 “Please relay that I am okay, and to not worry about me.”

Jin Goo, who is known for acting with his gazes, will be acting the role of Seo Dae Young, who’s a soldier down to his core. This is because he seems as if he was wearing the clothes of a soldier rather than a civilian since his birth, and his heart moves at the thought that he is protecting his family and homeland with his own two hands. As a part of the army’s special forces rescue team, he has been involved in aiding many disaster areas, such as the Sichuan province, Haiti, and East Japan after the huge earthquake. Because heavy actions are more comfortable to him than lighthearted conversations, Seo Dae Young doesn’t know how to express himself freely. However, he is a hot-blooded man whose heart is deeper and wider than anyone else’s. 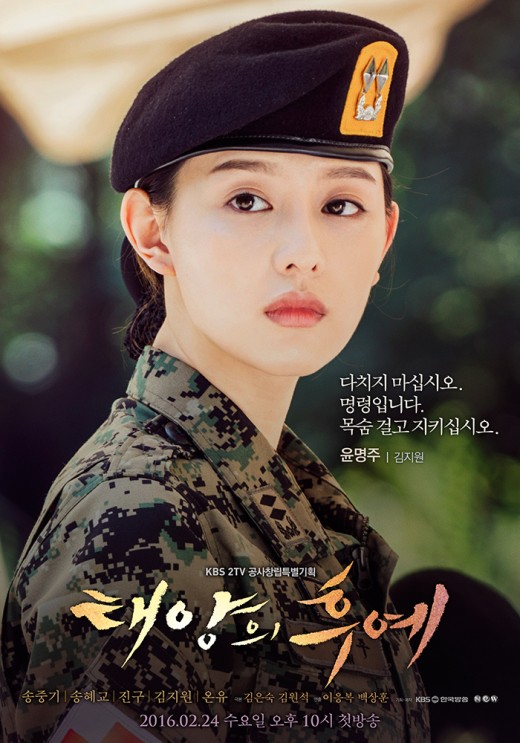 “Don’t get hurt. That’s a command. Protect with your life.”

Kim Ji Won, who has a chic image, will play First Lieutenant Yoon Myung Joo, the terrific female soldier who has her eyes set on only one man. She is someone with many names: Korea’s female soldier, not just a soldier but an army surgeon, the only daughter of the Commander of the Unconventional Warfare Task Force, and the so-called “general’s daughter.” Following her father’s footsteps, she enters the military academy and becomes a soldier. During her first unit assignment, she meets a certain man. However, he is merely a first sergeant with a GED background. She regrets for the first time becoming a soldier, but she refuses to back down. Yoon Myung Joo is truthful with her feelings, and in order to protect her love, she is willing to endure any danger and face everything straight on.

“Descendants of the Sun” was written by Kim Eun Sook and Kim Won Suk, directed by Lee Eung Bok and Baek Sang Hoon; and produced by NEW. It will air its first episode on February 24, and will be avaliable exclusively on Viki.