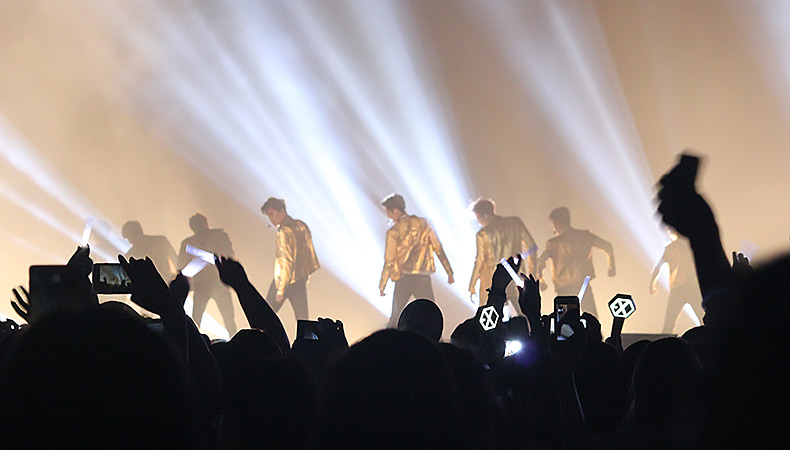 6 Times EXO Was Iconically EXO at The EXO’luXion LA

I’m not going to lie, EXO has always been one of those groups that I keep tabs on despite not being on top of my bias list. I know all the members, I got over their song “MAMA” to continue jamming to all of their title tracks released until today.

I was excited for The EXO’luXion show in LA. I was not prepared for how ridiculous EXO was going to be in person. Unfortunately, king of the beagle line Baekhyun was suffering from a sore throat in LA so most of his hilarity was muted but the rest of the members picked up the slack! Behold some of our favorite moments from the show:

EXO decided to re-create Christmas during their show and at first I was very unimpressed with this prospect. But then they appeared dressed as elves. ELVES! As the stage doors opened, suddenly EXO was spilling out wearing suspenders and elf shoes and silly hats. And then Kai decided to bully D.O. for his ridiculous outfit (despite the fact that they were wearing the exact same thing). He reached to yank off D.O.’s hat and D.O. was (probably) not amused. While you’d think Kai would then be groveling for forgiveness, instead he shoved D.O. out of the way to follow his hat to the ground. Brave, Kai, brave. All of this while crooning their hit “Peter Pan.”

Also during “Peter Pan” we learned that Chanyeol is a fan of either Baeksoo or pain. Perhaps both. In the middle of the song, the music pauses and everyone “freezes” except Chanyeol who is, apparently, free to do whatever he wishes with his frozen bandmates. While at first he used the time to attempt to reveal Kai’s abs, he soon progressed into forcing D.O. and Baekhyun into a hug. It fails spectacularly as both participants attempt to kick him with Kai joining in for good measure as well.

3. Chanyeol Revealing a Love of Jogging

The same day as The EXO’luXion in LA, there was also a major marathon in the city. Perhaps this reminded Chanyeol of his love of jogging or perhaps he was just full of pent up energy. Whatever the reason, he spent half of the second ment just jogging around on stage. When asked what we wants to do in LA? “Jogging.” What he did for Christmas last year? “Jogging.” D.O. in particular loved this as he immediately told Chanyeol: “If you love it so much, please continue” and attempted to force him into running another lap around the stage.

I never realized how much I needed to hear Sehun rap: “Imma take you to the secret place, drop the shades and crank the bass.” It was life-changing. My skin cleared up. I will get straight A’s if I go back to school. Etc. Etc.

I’m sorry but not only can Xiumin sing but he can also, definitely, rap. When he and Chanyeol suddenly took the stage together, I didn’t know what to expect. Both of them tearing it up like some pinnacle of the rap-line? I wasn’t prepared. New favorite song: “Full Moon.”

Suho‘s English is actually pretty amazing. Which meant that he talked, a lot. But as he was leading the show, he was also being his typically – how should I say – dorky self? He forgot to take off his elf shoes when they all changed out of their costumes, he tried (and failed) to wrangle Chanyeol into remaining still and not jogging around the stage 5 times, he put up with Chen telling him that no one was listening to him talk about the end of the show. Finally, he just yelled “PAY ATTENTION TO ME.” And we did, I promise. Fellow writer minjiya left the show in Dallas with a new hashtag for him: #EarnestSuho.

All in all, I have to say that I thoroughly enjoyed the show and spent the rest of the evening after it just talking about how ridiculously wonderful the members are. A special thank you to My Music Taste for inviting us to cover the show! Don’t forget that EXO is not done with America yet – they have a show in Chicago on Friday and their last one in New York on Sunday! Don’t miss them!

Did you attend one of the EXO’luXion stops? What were your top moments?