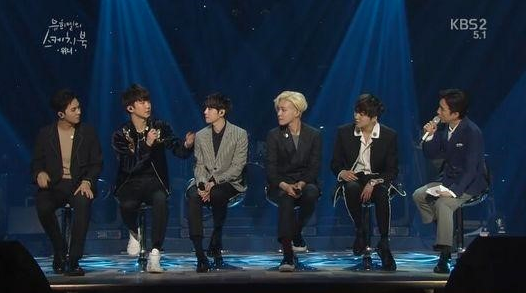 WINNER Is Not Satisfied With Their Group Name?

It was previously announced that WINNER would be making an appearance on KBS‘s “Yoo Hee Yeol’s Sketchbook.” During the February 19 broadcast, WINNER playfully revealed that they were not satisfied with their group name.

When MC Yoo Hee Yeol asked the boys if they were happy with their team name, Song Mino replied, “BIGBANG and iKON have a ‘complete pronunciation’ to their names, so they have impact. Our team name doesn’t have that feeling so we are envious.”

The members are referring to the fact that their name doesn’t end with a consonant sound in Korean while BIGBANG and iKON does. Despite their playful comments, the group does like their group name.

WINNER made a comeback this month with their new mini album, “EXIT: E,” and have been busy with their promotions.

What do you guys think of their group name?

WINNER
Yoo Hee Yeol's Sketchbook
How does this article make you feel?