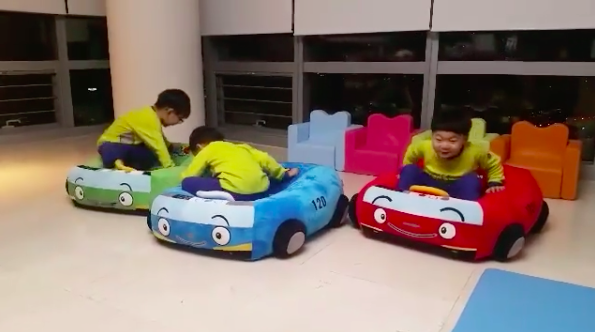 Actor Song Il Gook has shared a video of his beloved triplets to Instagram!

Although Song Il Gook only joined Instagram on February 14, he has already shared plenty of photos of Daehan, Minguk, and Manse with his followers, including sets of photos and videos of Daehan and Minguk.

In the early morning on February 21, Song Il Gook updated his Instagram with a new video for fans that’s dated as being filmed on November 27, 2015. He writes as the caption, “Daehan, Minguk, and Manse, who are riding the Tayo buses they received as gifts and liking them.”

He goes on to say, “I was planning on uploading [photos of] Manse today, but I’ve been so busy making a water clock that I’ll have to postpone it a few days… T.T.” The water clock he mentions is a reference to the KBS drama “Jang Young Shil” that he is currently busy filming, in which he plays the inventor Jang Young Shil, who was the scientific genius behind inventions such as the self-striking water clock.

In the video, Daehan and Minguk happily act out a scene together, while Manse, ever the car fanatic, adorably tries to get his toy bus to move across the floor.