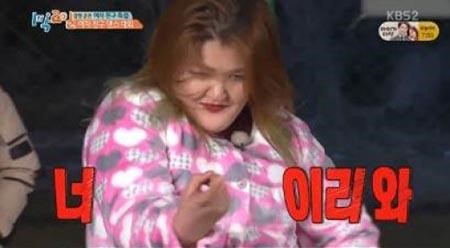 During lunch, Lee Guk Joo attempted a sexy dance in order to win food from the other teams. Through the dance, she managed to find a victim in PD Yoo Ho Jin who was hiding in a corner and brought him out to dance. After the dance, Defconn commented to everyone’s laughter, “It’s been a while since I’ve seen PD Yoo Ho Jin this flustered.” Then a writer for the show added, “PD Yoo Ho Jin says that he got to experience feelings that he never had before.”

Lee Guk Joo continued her seduction of PD Yoo Ho Jin by selecting him as a partner for tube sledding during the day activities. And during dinner time, she performed another sexy dance in order to win food. During the dance she went up directly in front of Yoo Ho Jin while pointing her fingers at him. She finished her dance by sitting on the scared PD’s lap, causing him to fall off his chair and making the set explode in laughter. Lee Guk Joo’s persistent aegyo finally resulted in Yoo Ho Jin giving up two ramen for the “2 Days & 1 Night” cast.

Watch Lee Guk Joo display her fatal charms in “2 Days & 1 Night” below as well as the latest episode on Viki!