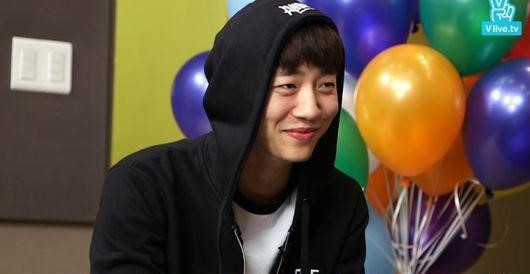 On February 21, B.A.P hosted a live broadcast via Naver V app for “B.A.P Carnival Countdown” leading up to the release of their fifth mini album “Carnival.”

During the show, member Bang Yong Guk shares what title track “Feel So Good” means to him. “It’s a song that we made with people we really wanted to make it with,” Yongguk reveals. “It was the best song selected out of 30 title track candidates.”

“It was the first time we made [a song] with foreign artists. It was a new world. The session was recorded in the United States as was the chorus,” he adds. “While making the song we tried to do a lot of new things.”

He concludes, “We’re laughing now, but this is a very important album to me. And that’s why I’m so nervous and anxious.”

Meanwhile, B.A.P released their fifth mini album “Carnival” on February 22 and will set off on their world tour after wrapping up domestic promotions.

Support the artist by buying B.A.P – Carnival from YesAsia