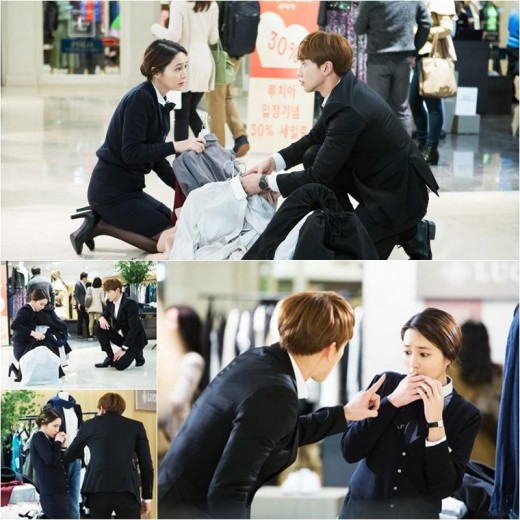 Ahead of the fast-approaching premiere of “Please Come Back, Mister,” SBS released new stills of Rain and Lee Min Jung.

In the drama, actor Kim In Kwon plays Kim Young Soo, who is a section chief of a department store in his 40s with a dead-end career. He suddenly dies and ends up reincarnating as an “elite flower boy manager” named Lee Hae Joon (played by Rain). Lee Min Jung plays the widowed wife of Kim Young Soo, Shin Da Hye. Kim Young Soo gets a second chance at life with the improved physical appearance and enhanced societal position in Lee Hae Joon.

Within the scene of the newly released stills, Kim Young Soo runs into his wife Shin Da Hye who does not recognize him in the body of Lee Hae Joon. Kim Young Soo approaches his wife with a sense of familiarity, but Shin Da Hye displays a bewildered expression with her guarded posture.

The first meeting scene between Rain and Lee Min Jung’s characters in the department store was said to have been filmed on February 9 and took around two hours to film. The actor and actress fervently rehearsed together until the set was prepared and created a perfect scene with their natural and synchronized acting. The two discussed their parts and other topics of their daily life with each spare break between filming. Their “same-age chemistry” (both born in the same year) heated up the drama set.

A representative from the production staff said, “Although Hae Joon knows that Da Hye is his wife, Da Hye doesn’t know that Hae Joon is his husband, Young Soo. This scenario between the two characters makes the drama more exciting. It’s not long before the premiere, so please give lots of interest and love for ‘Please Come Back, Mister.'”

Watch a teaser for it below!

Lee Min Jung
Please Come Back Mister
Rain
How does this article make you feel?