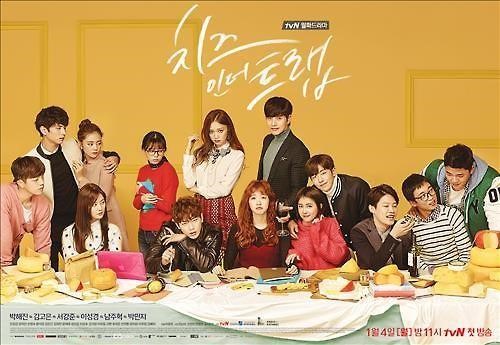 Conflict between the original writer of “Cheese in the Trap” and the drama staff has risen to the surface.

Although “Cheese in the Trap” started off with great anticipation, viewers, the original author, and managing agencies are showing their dissatisfaction with the plotline of the latter half.

On February 24, the original author Soonkki opened up about the drama on her blog.

“I wanted the drama to have an entirely different feel from the comics because they are built on different types of media. However, the actual drama failed in doing so, being hailed as ‘true to the original,’” she said. “They never contacted me, so I had no idea that they were going to film the drama to exactly follow the comics.”

Though Soonkki admitted that she couldn’t have too much say in the drama, as it is the result of a lot of people’s hard word, she said it wasn’t until she adamantly complained that she even got the scenario for the drama’s plot after episode six. She also said the first time they contacted her after filming was regarding the ending. When she heard that the ending would be similar to the original comic, which was different from what she had requested, she also asked for them to change it as well.

She also showed her discomfort with the staff’s use of the word “Chee-mother,” which is a term targeted at the hard-core fans of the comics, when advertising the drama. “Chi-mother” sounds very similar to the Korean word for “mother-in-law,” which can be seen as having a negative connotation.

Park Hae Jin’s managing agency W Company also indirectly expressed their dissatisfaction through their official Instagram on February 23 and 24, leaving captions such as, “The filming set, which is an actor’s second home, should be holy. A drama can’t be a place for only one person,” “Jung~ Where are you. Can you hear me?”, and “The weight of a script. Its value is infinitive.”

Several fans have shown their dissatisfaction with how an episode that originally centered on Yoo Jung and Hong Sul has been changed to focus on Baek In Ho and Hong Sul, and that the plotline is focused on Baek In Ho’s background without concentrations on Yoo Jung’s emotions.

Though “Cheese in the Trap” started off with a rating of 3.59 percent on January 4 and reached 7.10 percent on episode nine, it has dropped since then and currently lingers around five to six percent.

The drama’s production staff has since stated, “We are currently trying to contact Soonkki in order to discuss [the drama] with her.”

Cheese in the Trap
Soonkki
How does this article make you feel?