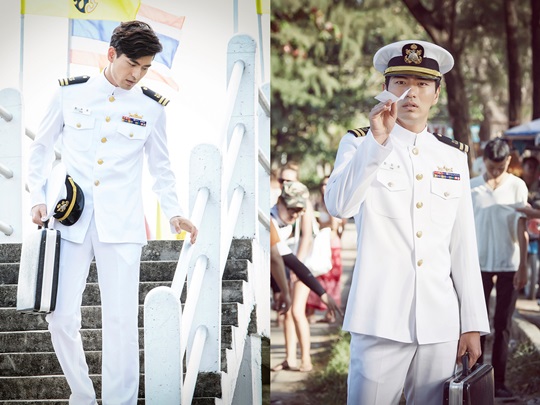 Get ready to see Lee Jin Wook in a sleek uniform in “Goodbye Mr. Black.”

Lee Jin Wook has taken on the male lead, Cha Ji Won, for the new MBC Wednesyday-Thursday drama “Goodbye Mr. Black,” which will first air on March 16. His character will show the dramatic transformation of pleasant optimist turning into a revenge seeker.

In the still cuts revealed on February 26, Lee Jin Wook can be seen acting Cha Ji Won before he starts seeking for revenge, when he was a laidback naval officer. His white uniform, simple haircut, and sleek fit makes him look masculine. His good looks are just a pleasant addition to the picture.

In the drama, Cha Ji Won is the trouble maker of the Navy, but he is impossible to hate because of his playful charms. Not only does he take good care of his people and is down-to-earth, but he also portrays great leadership. Thus, he has the status of an idol within the Navy.

However, when he is betrayed by a friend he trusted, he starts plotting for revenge. In the revealed teaser, Lee Jin Wook can be seen acting his heart out. Even when he is being chased, framed as a murderer, his eyes shines in determination to prove his innocence.

“Goodbye Mr. Black” is based on Hwang Mi Na’s comic under the same name. It stars Lee Jin Wook, Moon Chae Won, Kim Kang Woo, Song Jae Rim, and Yoo In Young and will be filled with exotic scenes from Thailand and Bangkok. It will first air on March 16 after “One More Happy Ending” ends.

Goodbye Mr. Black
Lee Jin Wook
How does this article make you feel?