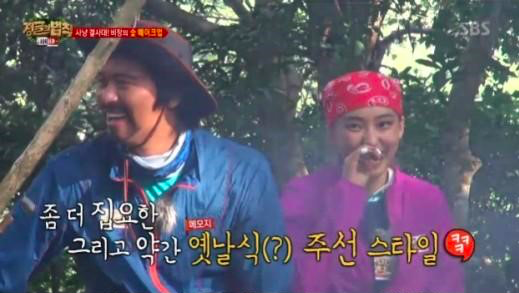 Unfortunately, the team wasn’t able to find enough food and had to suffer hunger pains, but kept up their bright and cheerful attitude throughout the episode.

Lee Jong Won asked Bora if she had a boyfriend, which she denied. “If Lee Jang Woo wrote his contact information on a Post-it note for you, would you be happy or upset?”

Bora only answered, “Wow,” taken aback by the sudden question, but Lee Jang Woo made everyone laugh by requesting a Post-it note that very instant. “This is the first time I’ve seen Lee Jang Woo smile this brightly,” Kim Byung Man noted.

Law of the Jungle
Bora
Lee Jang Woo
SISTAR
How does this article make you feel?