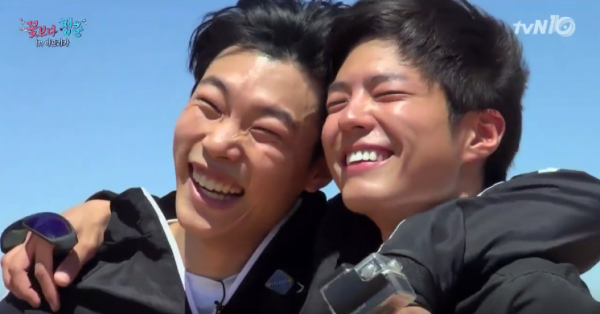 “Reply 1988” star Park Bo Gum recently opened up about the drama and his participation on “Youth Over Flowers in Africa” in an interview, where he admitted that fellow actor Ryu Jun Yeol makes his heart flutter.

When asked what Ryu Jun Yeol’s charm is, Park Bo Gum answers, “He’s the kind of guy who goes above and beyond what is written in the script. If there’s a heart-fluttering scene, even men who watch him will feel their hearts flutter, too. [Seeing him,] I thought to myself, ‘I have a lot to learn.’ He has a lot of heart, too. Before filming, he always showed his expressions of friendship to me, like sending hearts my way.”

He continues, “Of course, while we were filming, we were immersed in our separate characters, so he held off on those kinds of expressions. Thankfully, once we went on ‘Youth Over Flowers’ he started up again.”

Park Bo Gum then says that Ryu Jun Yeol has a lot of leadership, admitting that the older actor took care of a lot of things while they were traveling, like reserving their rooms and driving them around. “He took care of us in a place we’d never seen before, so I was very thankful to him for that. Whenever [Ryu Jun Yeol and the other hyungs] call me by name, my heart flutters.”

Meanwhile, Park Bo Gum is currently appearing on “Youth Over Flowers” with the rest of the star cast of “Reply 1988,” as well as hosting KBS’s weekly music show “Music Bank” along with Red Velvet’s Irene.