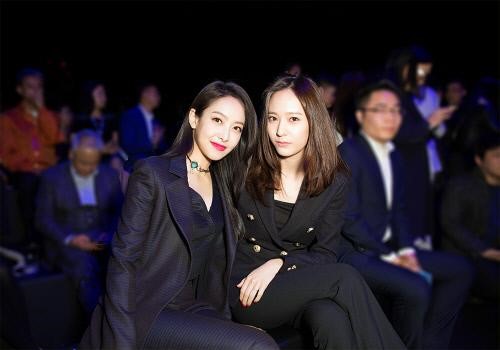 f(x)’s Victoria and Krystal were acknowledged for their sense of fashion at a Chinese fashion awards event.

On February 29, the “Jumei Award Ceremony 2016” was held at Beijing, China. Victoria won the Most Popular Goddess Award, while Krystal won the Fashion Icon Goddess Award.

This is the second year the “Jumie Award Ceremony ” has been held. Co-hosted by fashion magazine BAZAAR China and Jumei, a famous Chinese fashion shopping mall, it awards the most fashionable Asian celebrities of the year in 12 different categories.

Other than Victoria and Krystal, big names like Jason Statham, He Jiong, Zheng Kai, and Jia Nai Liang graced the event. The presidents of Ali Pictures and Sisang Group are present as well.

Other Korean stars awarded at this event were Lee Kwang Soo, Ji Suk Jin, Gary, and Haha for their “Variety Influence.”

During their acceptance speech, Victoria and Krystal said, “Thank you. We will continue to show you the several colors we have.”

JUMEI Award Ceremony 2016
f(x)
Krystal
Victoria
How does this article make you feel?