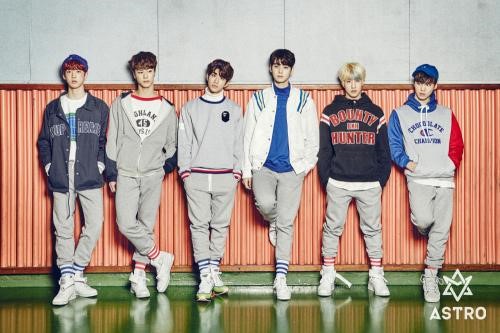 ASTRO Reveals Their Dreams and Aspirations for 2016

Jinjin introduces the group, revealing, “We first appeared in front of the public during our activities during our pre-debut era, and we’ve made an official debut in the music scene with our first album, ‘Spring Up,’ which was released on February 23. We’re nervous, but excited, to put out the results of our hard work. We prepare every stage with all our efforts in order to repay the vast amount of love we’ve received from our fans.”

Moon Bin explains that their pre-debut era wasn’t too long at all, and that it was a fulfilling time where they honed their talents and spread their name, ‘ASTRO,’ around. He says, “We were able to see, hear, and learn a lot thanks to our pre-debut promotions.”

When asked if they like their team name, Jinjin answers, “We found out our team name after it had already been released through social media networks. At first, it was a little strange and unfamiliar, but after hearing it again and again, it sounds affectionate and feels like our real names. We like our team name.”

If you look at ASTRO’s album, their yellow outfits reminiscent of spring catches your eye. Cha Eun Woo says, “The album is called ‘Spring Up.’ It’s a name that exemplifies the fresh and lively energy of spring that we want to give to the public. People around us seem to call us ‘chicks’ when we wear these yellow outfits. Once, we couldn’t help but laugh when 2AM‘s Jo Kwon sunbae (senior) took one look at us and called us forsythia (a type of yellow flower).”

ASTRO’s maknae (youngest member) Yoon San Ha was born in 2000, and has yet to even fully grow. When asked if there’s anything difficult about debuting at such a young age, he replies that there is absolutely nothing. He explains, “My hyungs (older brothers) take care of me really well, and I’m currently receiving a lot of love while promoting. I enjoy working as a singer during a time when I should be at school only studying. I’m promoting while learning all the positive attributes about being a singer.”

There’s a lot of new idol groups coming out these days. When asked what sets ASTRO apart, Rocky explains, “There’s a lot of male idol groups with stronger and more charismatic concepts. However, Astro has a brighter and healthier feeling. We’re certain that with our music, outfits, and performance that match the spring season will set us apart.”

Finally, MJ energetically reveals, “Now that we’ve officially debuted, we will work even harder to make the name ‘ASTRO’ known. Our goal is to receive ‘Rookie of the Year.’ We want to confidently grab that award through our own efforts, music, and talents in 2016.”

ASTRO, also known as Hello Venus‘s younger brothers, is under Fantagio Entertainment. They are currently promoting their title track, “Hide and Seek,” from their album “Spring Up.”

Support the artist by buying Astro – Spring Up from YesAsia