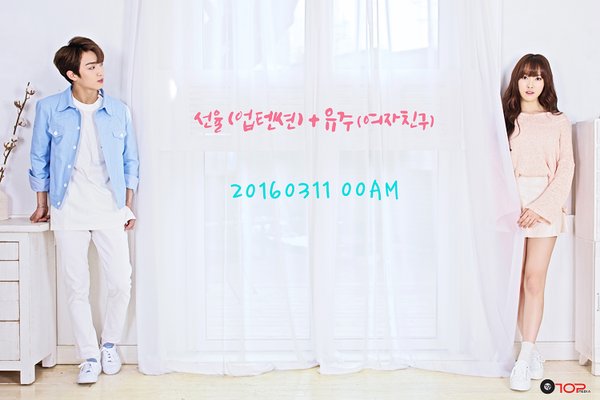 Two members of popular rookie groups are teaming up for a new duet project!

On March 4 at midnight KST, the official social media accounts for UP10TION shared a teaser image for a new single featuring group member Sunyoul and GFRIEND’s Yuju! The caption to the images calls it a “Best Friend Project,” and promises it will be released at midnight KST on March 11.

Sunyoul debuted as a member of UP10TION in 2015 under TOP Media, with their debut mini album “Top Secret.” The group most recently released their latest mini album “Bravo!” in November of 2015. Meanwhile, Sunyoul impressed the celebrity panel and audience of “King of Mask Singer” in January when he fooled them all into thinking he was a woman.

Yuju also debuted in 2015 with GFRIEND under the small agency Source Music. GFRIEND recently took the music shows by storm with the track “Rough” off their January mini album “Snowflake.”

Are you excited to see this collaboration?

GFRIEND
UP10TION
Yuju
Sunyoul
How does this article make you feel?