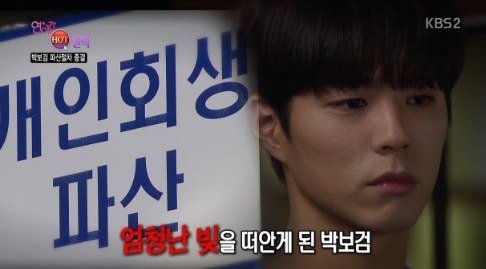 On the March 5 broadcast of KBS 2TV‘s “Entertainment Weekly,” details about why Park Bo Gum filed for bankruptcy, and how it was resolved, were revealed.

Recently, it was belated revealed that Park Bo Gum had filed for bankruptcy, and that it was all resolved. Park Bo Gum originally declared bankruptcy in 2014, and the court ordered the adjudication last year. Everything was cleared within six months.

Park Bo Gum originally encountered this situation not because of a personal debt, but rather his father’s. When his father borrowed money from a mortgage lender, he wrote his son as the joint surety. The debt is known to have been close to 800 million won (approximately $667,600).

The court also revealed that the process for bankruptcy was stopped with the agreement that “the debt would be canceled as long as he pays 30 million won (approximately $25,000).” Park Bo Gum’s side also says, “It’s a matter that was solved peacefully. Currently, there are no problems.”

Park Bo Gum has confirmed “Moonlight Drawn By Clouds” (tentative title) as his next drama project, after starring in the big hit “Reply 1988.”

Park Bo Gum
Entertainment Weekly
How does this article make you feel?