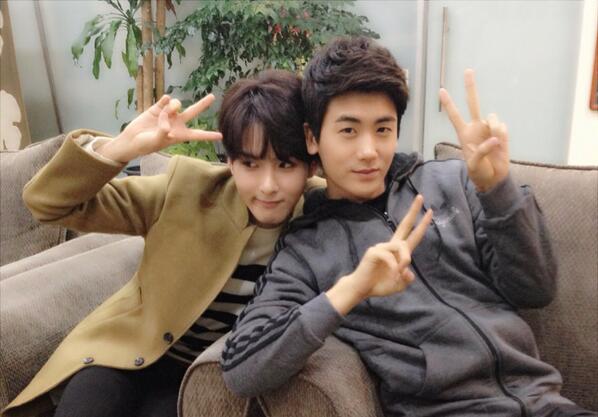 PD Hwang Ji Young of the recent hit web series “Celebrity Bromance” has revealed who she has lined up for the next season of the show!

The first season of “Celebrity Bromance” followed friends BTS’s V and actor Kim Min Jae as they went for a massage and celebrated V’s birthday. The current season is following Block B’s Zico and actor Choi Tae Joon as they hang out together.

In a recent interview with OSEN, Hwang Ji Young explains how they go about filming the show. “We listen to what the cast members want to do,” she says. “The crew talks a lot with the cast. Although we’re filming, they’re hanging out together so they do what they want to do. In the first season, it was BTS’s V who said he wanted to have a sports massage. Since he dances a lot, he said parts of his body hurt. It was the show’s staff that found the sports massage therapist.”

When asked how they decide who to cast on the show, Hwang Ji Young replies, “We look for surprising friendships that many people don’t know about. Choi Tae Joon and Zico were friends before they debuted. When we asked Zico who he wanted to be on the show with, he said Choi Tae Joon right away.”

Hwang Ji Young says she thinks that if the stars of the show are already friends, it’s naturally more fun and interesting. For that reason, she’s been searching for more unexpected friendships.

“Super Junior’s Ryeowook and ZE:A’s Park Hyung Sik are expected to be appearing in the third season,” she reveals. “The two of them are close. If I have the chance, I’d like to cast Song Joong Ki and Lee Kwang Soo. I’ve heard that they are really close friends.”

What friendship would you like to see on “Celebrity Bromance”?