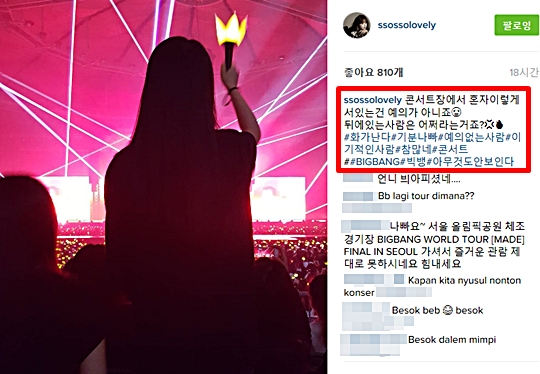 Yoo So Young Complains About Inconsiderate Fan at BIGBANG’s Concert

Former After School member Yoo So Young joined the many fans at BIGBANG’s final stop on their world tour this past weekend. Unfortunately, it seems the young actress had a bad experience.

On March 6, Yoo So Young posted a picture of the back of a BIGBANG fan to her personal Instagram account. In the caption, she wrote, “It’s not polite to be the only one standing inside the concert venue. What are the people behind you supposed to do?”, adding the hashtags, “Pissed off,” “Unhappy,” “Impolite person,” “Selfish person,” and “I can’t see a thing.”

Yoo So Young deleted the post on the morning of March 7 KST. Reactions to her post varied; some agreed with Yoo So Young, saying that if the fan had wanted to stand, she should have purchased a ticket for the pit. Others disagreed with her posting the photo on social media without the fan’s permission, even though it didn’t show her face.

What’s your take on this?