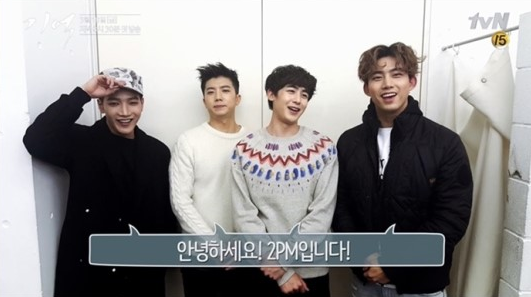 Watch: 2PM Makes Surprise Video for Junho to Support His Role in “Memory”

2PM has planned a surprise video for Junho to show support for his new drama “Memory.”

On March 8, tvN revealed a video where Junho introduced himself and his role in “Memory.” In the video, the staff asks him if 2PM members have said any words of support. To this he says, “They haven’t said much,” and looks a bit disappointed.

However, in the middle of the video, 2PM members make a surprise appearance. They say, “Junho is studying hard at acting despite being busy. We’re quite excited for this drama since we are fans of tvN. We will definitely catch the original broadcasts.”

After that clip, Junho continues his words, saying, “I’m happy and excited to greet my fans through a new drama. Please give lots of love.”

“Memory” is about a lawyer, who one day suffers from Alzheimer’s disease, and his family who has to deal with this sudden change. Junho will be playing an elite lawyer named Jung Jin, who is a bit rough but has a warm heart.

Memory
2PM
Lee Junho
How does this article make you feel?