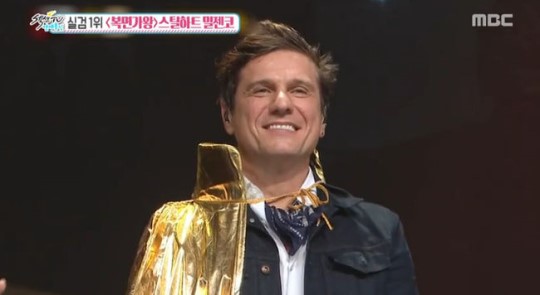 During an interview that took place on March 8, at SR Hotel in Seoul, Steelheart‘s Miljenko Matijevic explains that the reason he decided to sign a contract with a Korean company is that he believes “it is an opportunity granted from heaven,” and that it’s because he “likes Korea.”

While laughing, he also says, “Korean company people keep their promises and they’ve done everything they said they would do. Now, we have a sibling-like relationship.”

He further elaborates, “South Korea is a lovely place. I really love it here. ‘She’s Gone’ is also a famous song here. Korean people always try to make it a comfortable atmosphere, and it is easy to talk to them. That’s why I like Korea.”

Miljenko Matijevic recently was the first foreign singer to appear on MBC‘s “King of Mask Singer,” during the February 28 broadcast. As “A Quiet Lightening Man,” he sang Radiohead‘s “Creep,” as well as Boohwal‘s “Story of You and the Rain,” and Lim Jae Bum‘s “Confession.” He revealed that he studied Korean for four months in order to be able to sing these songs. While he ended up losing to EXID‘s Hani, he also sang his most famous song, “She’s Gone,” after his defeat.

The four-membered group Steelheart debuted in 1990 with their first album, “Steelheart.”

Steelheart
Miljenko Matijevic
How does this article make you feel?