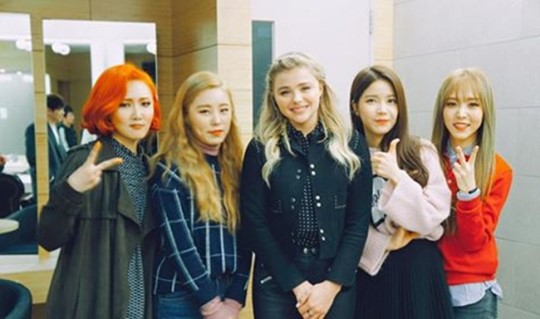 MAMAMOO Talks About Their Secret to Success and Chloe Moretz

MAMAMOO has been rising as one of the most popular girl groups so far, proven by their comeback song “You’re the Best” getting first place four times in a row.

MAMAMOO stated, “We are so happy to be receiving so much love promoting this song. We still can’t believe it. We’re very thrilled to have gotten first place, which was our goal for releasing this album.”

When asked about what must be the secret to their popularity, the members said, “It must be because the music is good. Our album has songs that others can relate to, and they can listen to it comfortably.”

Their popularity has now been spread even more globally thanks to Hollywood actress Chloe Moretz. When she visited Korea, she became a fan of MAMAMOO and promoted them through her SNS.

MAMAMOO relayed their thoughts, saying, “When Chloe Moretz first mentioned us on her SNS, we couldn’t believe it. We had fun preparing for the stage, and that excitement must’ve shown through. We haven’t traveled overseas much yet, so it’s surprising to see others liking our music worldwide. We want to meet more foreign fans if we get the chance.”

Support the artist by buying Melting from YesAsia

MAMAMOO
Chloe Moretz
How does this article make you feel?