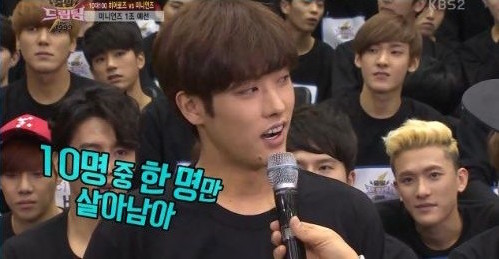 Cross Gene’s Takuya was one of the contestants on the March 13 broadcast of KBS2’s “Dream Team.”

This episode features 100 rookie male idols who face off in a new hybrid game of physical competitions and computer games, in order to determine who will come out on top as the “ultimate hero.”

During the interview portion, Cross Gene’s Sangmin outs his fellow member, and reveals, “Takuya looked up fancams of EXID’s Hani until four in the morning.”

With a flustered face, Takuya retorts, “This isn’t why I agreed to come out,” but acknowledges that he is Hani’s fan.

Regarding his impending match, Takuya also says that he’s nervous, and that he will work hard in his match with the hero, revealing his determination.