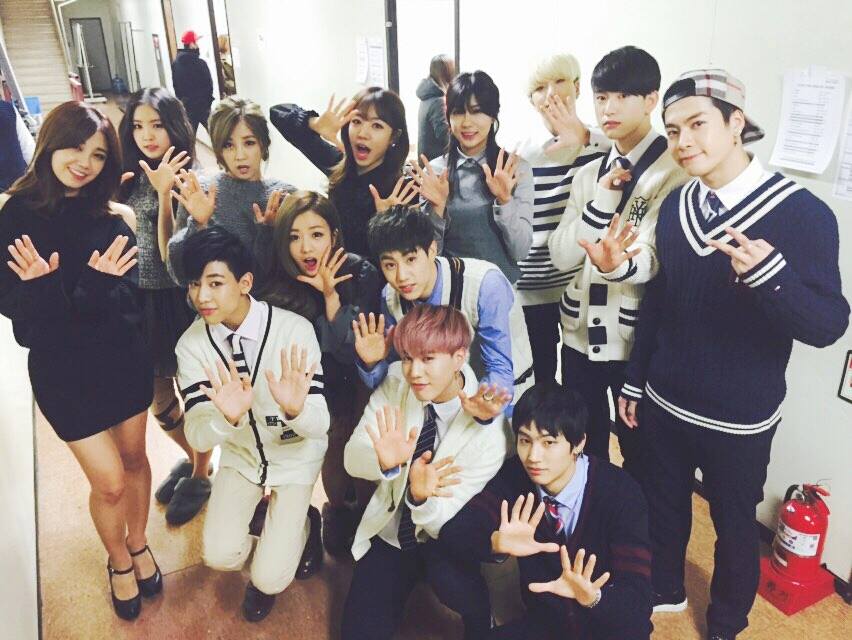 Before you can go on and perform your own songs, you have to be able to master singing already made songs, right? These idol singers do a fantastic job of covering other famous hits and adding their own flair to it. Making covers is a great way to demonstrate their range of skills and for many, pay homage to senior artists who have paved the way in the field. Check out these 15 covers performed by idols that you can’t stop listening to.

This brother-sister duet takes our breathe away by adding their own touches to “Eyes Nose Lips,” a song that received wide accolades by all and covered by many. Suhyun‘s soft voice and Chanhyuk‘s complementing harmony give it a pop feel but the two make sure to keep the RnB style, making this acoustic version flow perfectly.

Three groups, one song, one stage? With the talent and charm that Girl’s Day, AOA, and BESTie put into their performances individually, there was no way this special joint stage wasn’t going to be a hit. Their teamwork is really shown as they cover this popular hit.

If the original cartwheels and flips by 2PM impressed you, then GOT7‘s powerful acrobats will surely stun you. I’m sure the viewers reactions were just as rowdy and excited as the crowd watching the live performance. GOT7‘s cover reminds us that this song still remains catchy after all this time.

This touching cover of “That XX” with a shift in perspective, now from a female’s point of view, really gets the feels going. A tear-jerking performance that embodies heartbreak and despair by the members of 15& and their labelmate HA:TFELT really moves listeners to tears with how much heart they put into their performance with such profound lyrics and exquisite harmony.

This 90s hit that has been covered by numerous groups over the years remains one of the most popular songs among K-pop fans, and UP10TION does that fame justice. You can see how much this song means to everyone by watching other artists sing and dance along in the audience.

What starts as a slow, serenade gradually escalates to a fun and celebratory performance of some of g.o.d‘s most legendary songs. 2AM‘s powerhouse vocals bring these 90s hits to life and we even get to hear a little rap come out of these ballad singers!

This recent joint stage recreating Girls’ Generation‘s “Gee” hits the nail right on the head. GFRIEND and TWICE completely master every aspect of this song, from the colorful pants to the synchronized dance moves. A performance that is just as catchy as the original.

This casual acoustic cover by B.A.P‘s Daehyun (and unknown friend) radiates talent. He even turns the rap into lyrical singing. This is a cover that definitely deserves more recognition!

With a fantastic tribute to their senior labelmates, EXO members put out a great performance that features their dance skills, showing off some famous choreography. Also, you can’t miss Chen slaying that high note in “Mirotic” and D.O‘s smooth ending note in “Sorry Sorry.”

A fun cover in every way, from their outfits to dance moves and surprise appearance by Hyori herself! What a great way to show off their friendship made through DSP Entertainment, who debuted Hyori ten years before this cover turned collaboration.

This cover by the golden maknae, Jungkook of BTS, is just one of the million reasons why he is known as the golden maknae. His display of emotion in his singing truly touches listeners and gets them thinking about the lyrics describing sentiments of family.

Covering a BIGBANG song is one of the hardest things to do and for B1A4 to cover two of their songs is a true testament to B1A4‘s talent. The colorful outfits make the performance pop and Baro covering T.O.P‘s raps is just the cherry on top.

This bubbly, cute cover by the men of GOT7 is a delightful contrast from what we usually see from them. They can even make cartwheels adorable! To add to their cuteness, you can even see the members of A Pink cheering them on and doing the dance moves with them.

The mastery of choreography and synchronization echoes the original to a T. This cover of the timeless hit “Perfect Man” was even complimented by Shinhwa‘s Kim Dongwan himself. You know a performance is awesome when the crowd can’t help but sing and cheer along.

Are there any other covers performed by your favorite idols that you want us to know about? Feel free to tell us in the comments below!

amycwang93 loves singing, dancing, and reading. When she is not imagining doing cartwheels along side with the members of GOT7, she spends her time online shopping.